New Delhi: Veteran Bollywood actor Rishi Kapoor left his fans and the film fraternity in shock when he flew to the United States last year to undergo medical treatment. He is often visited by friends from the industry, and recently Aamir Khan paid a visit to Rishi.

Rishi’s wife Neetu Kapoor, who is also in New York with him, took to Instagram to share an adorable photo of herself with her husband and Aamir.

She wrote, “It’s not how many hours one spends with a person it’s how much u give in that time !!! Aamir gave so much n more Love Respect Warmth Laughter !! He is a true superstar.”

READ:  Sanjay Dutt's 'Torbaaz' to premiere on Netflix next month

In the photo, the trio can be seen all smiles as they strike a pose together. 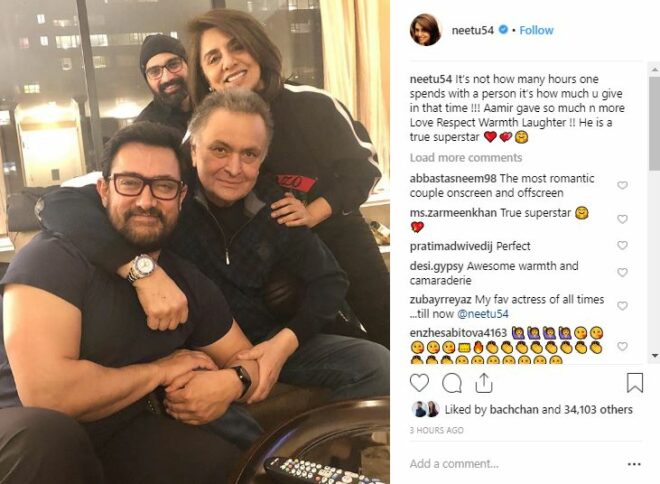 Rishi has been in New York since last year to seek medical treatment for an unknown health condition. He had shared the news with his friends on Twitter and added that he would be back soon.

Rishi’s children Ranbir Kapoor and Riddhima keep visiting him from time to time. Over the past few months, several celebrities including Alia Bhatt, Anupam Kher, Priyanka Chopra, Sonali Bendre, Javed Akhtar, among others went to see the veteran actor.

On the work front, Rishi Kapoor last appeared in ‘Mulk’ and ‘Rajma Chawal’.