The makers of the film will be releasing these glimpses in parts and Akshay took to his Twitter handle to share the first part. He wrote, “It’s an UNBELIEVABLE TRUE STORY. Presenting the first one from the #GlimpsesOfKesari. #KesariTrailer21Feb.”

In the short clip, the viewers can see snatches of the Battle of Saragarhi, one of the most famous battles fought by Sikhs in 1897. The Sikhs soldiers fought against Afghan Orakzai tribesmen in North-West Frontier Province (now Khyber Pakhtunkhwa).

The 30-seconds video also showcases a few glimpses of the battle, with soldiers running and roaring brandishing weapons.

Earlier this morning, the makers treated the fans to a brand new poster of Akshay Kumar, in which the actor looks feisty and fierce. The poster is close up of Akshay’s character and can be seen donning a saffron turban with a sword in his hand. Akshay shared the poster on his Instagram account. 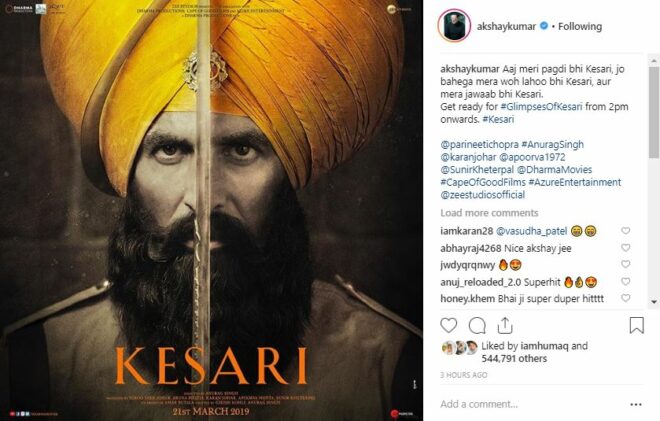 The upcoming film, based on the Battle of Saragarhi, where an army of 21 Sikhs fought against 10,000 Afghans in 1897, will see Akshay essaying the role of Havildar Ishar Singh.

‘Kesari’ also stars Parineeti Chopra in the lead role. The film, which is directed by Anurag Singh, is all set to hit theatres on March 21, giving fans a perfect Holi gift.

Apart from Kesari, Akshay will also be seen in ‘Good News’ and ‘Mission Mangal’, while, Parineeti will soon star in ‘Sandeep aur Pinky Faraar’ and ‘Jabariya Jodi’.