Anil dug out a truly-adorable throwback picture of himself and Sunita from when they were much younger and penned a heartfelt birthday message for her.

“This is what being young & in love looks like! Every day of my life is made better because of her…Happy Birthday @kapoor.sunita! You are the reason for everything! Isn’t she just flawless? I am so lucky! Love you,” he wrote alongside the picture. 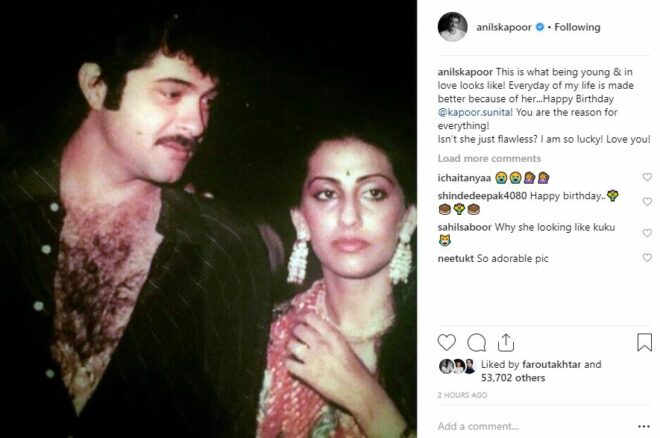 Sonam also shared a priceless photo from the family archives, which features younger versions of the Kapoor siblings- Rhea, Sonam, and Harshvardhan with their beloved mother.

“There are no words for how much you mean to me. You have always been the ultimate role model, supporting me and helping me stand taller against whatever I may face in my life. It’s your strength and grace that keeps this family so happy and we all love you for it. Happy Birthday, Mom! #mom #mother #momsarethebest #sunitakapoor,” Sonam captioned the lovely picture. 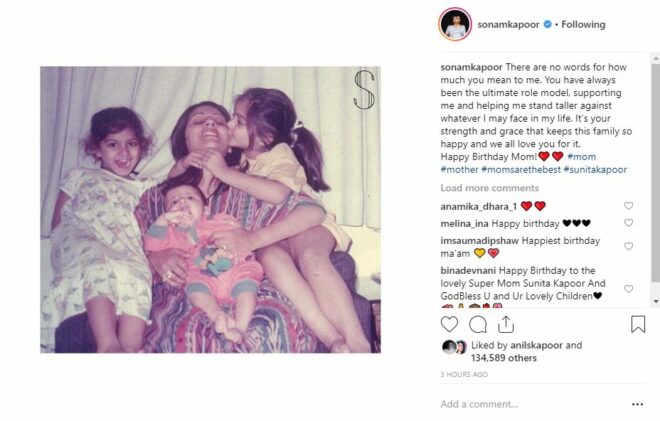 Sonam also shared a string of pictures on her Instagram story on her mother’s special day.

The Kapoor family rang in Sunita’s birthday with early celebrations at a dinner party last night. In a video posted on Rhea’s Instagram story from last night, Anil said: “May she lives 100 years,” to which Sunita hilariously responded: “What am I going to do for 100 years!”

Many of Sunita’s friends like Ekta Kapoor, Farah Khan, among many more wished her on social media.

The siblings adore their mother and recently spoke about her in an episode of ‘Koffee With Karan’.

In the episode, the sibling trio talked about how their mother is the one, who “runs the show” at the Kapoor household and that Harshvardhan is her favorite child.

On the work front, Anil Kapoor has begun shooting for Mohit Suri’s ‘Malang’ co-starring Aditya Roy Kapur, Disha Patani and Kunal Kemmu. Sonam, on the other hand, will be next seen in ‘The Zoya Factor’ alongside Dulquer Salmaan and Sanjay Kapoor.