New Delhi: Taking a stroll down memory lane, veteran actor Anupam Kher on Saturday shared a picture from the sets of the film ‘Dil’ which was released in 1990.

The picture clicked during the shooting of the film at Juhu Beach in Mumbai, features a younger version of Aamir Khan and Kher.

“Found an interesting old working still from the shooting of Inder Kumar’s #Dil. The movie released almost 30years back. The scene was shot on the Juhu Beach. We had not yet started taking ourselves seriously. Life was innocent.

What do think Dear Aamir is thinking here? Will be interesting to know your thoughts,” Anupam captioned the picture on Instagram. 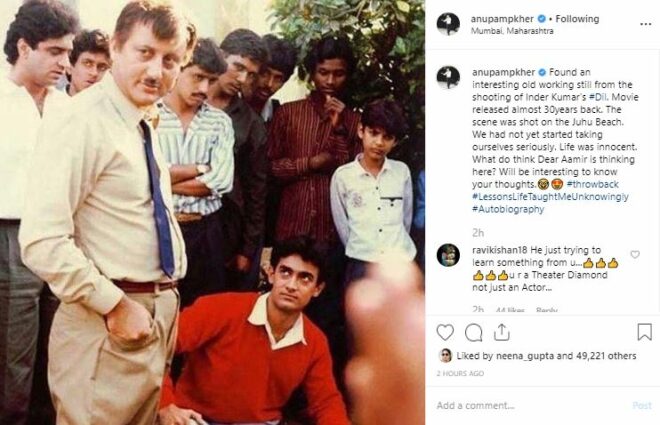 The picture shows Aamir Khan donning a bright red sweater over white shirt sitting on the floor while having his gaze fixed on his onscreen father in ‘Dil’ Anupam.

Looking much younger, Anupam can be seen wearing light color formals with a blue tie.

The story revolves around lead pair- Madhuri and Aamir – who initially disliked each other but later get into a romantic relationship.

The two were about to get engaged when Madhuri’s father played by Saeed, canceled the engagement as Aamir’s father, Anupam, was greedy and did not match his financial status.

At last, the two manage to reconcile their parents.

He had recently announced that his autobiography ‘Lessons Life Taught Me, Unknowingly’ will be out in August.