New Delhi: Father’s Day turned out to be a double joy for Priyanka Chopra Jonas!

The actor said that this year’s Father’s Day fell on her mother Madhu Chopra’s birthday and posted a major throwback picture of her with parents on Instagram.

“Father’s Day on moms birthday… it’s almost like dad is here celebrating with us. Don’t need a day to miss and appreciate you, dad. I love you,” she captioned the post.

She completed the post with a hashtag calling herself ‘Daddy’s girl’ for life. 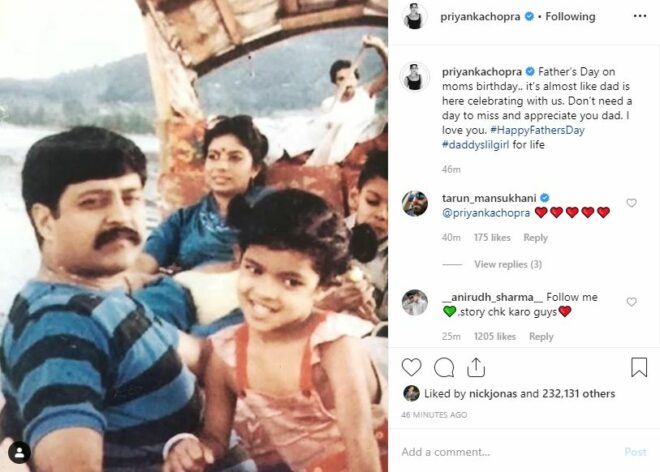 Priyanka never shies away from sharing about her family on social media. Just a week prior to Father’s Day, she paid an emotional tribute to father Ashok Chopra on his death anniversary.

The ‘Barfi’ actor who lost her father in 2013 wrote in her post, “6 years. Seems like yesterday we lost you.”
Last year in August, Priyanka celebrated her late father’s birthday with her mother and proved that she doesn’t need a day to show her love for her father.

“Happy Father’s Day Papa Kevin Jonas I feel blessed to have you and Denise Jonas in my life! Thank you for taking me in as your daughter with so much love and warmth Love you loads.”.

Meanwhile, Bollywood’s ‘Khiladi’ also had his ‘Like father, like daughter’ moment on the occasion of Father’s Day.
The actor shared a collage of two pictures where he and his daughter are both riding a bike. However, for Akshay’s daughter, it was just a video game bike! 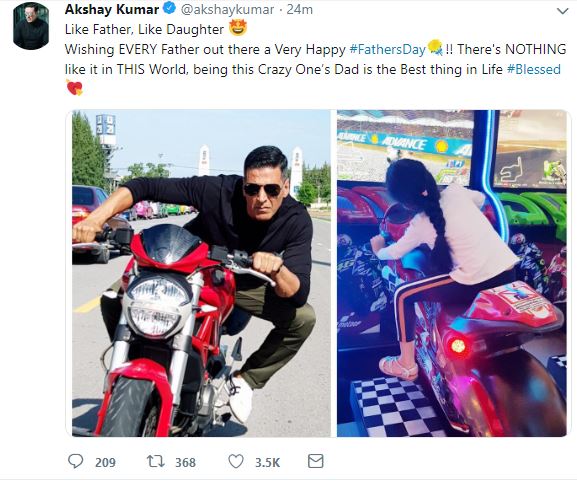