New Delhi: The craze for Bollywood superstar Shah Rukh Khan knows no boundaries. The latest person to join the SRK fan club is none other than famous singer-songwriter Chris Martin.

Earlier today, the Coldplay frontman took to his Twitter handle to give a shout out Bollywood’s ‘Baadshah’ and wrote: “Shah Rukh Khan forever.”

Sharing a list of his current favourite songs, Martin tweeted, “Hello everyone, I hope you are all doing ok, better than ok actually. Here is some music I love at the moment. Tal uno by Barrie, Dwa Serduszka by Mazowsze, A new beginning by John Williams from the Minority Report and Batard by Stromae.”

After sharing the list, the singer signed off writing, “Ok enough tweeting for one month. Shah Rukh Khan forever. Love”. 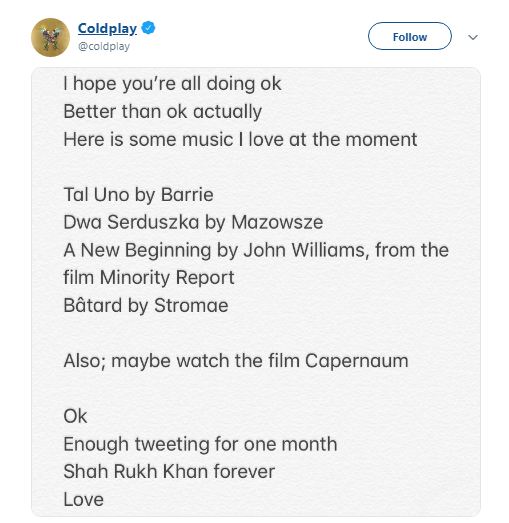 Earlier this month, SRK reportedly shook a leg with Chris at Akash Ambani and Shloka Mehta’s pre-wedding bash in Switzerland.

This is not the first time a renowned foreign artist has expressed his love for the Indian star. SRK’s fan base also includes Hugh Jackman, James Cameron, Akon, Leonardo Di Caprio, and Brad Pitt, to name a few.