New Delhi: Calling for Congress’ victory in the upcoming general election, posters of party president Rahul Gandhi and her sister Priyanka Vadra Gandhi have been put outside the party headquarters in New Delhi’s Akbar Road late on Tuesday.

Along with Rahul and Priyanka, the hoardings feature Robert Vadra too with a slogan “Kattar Soch Nahi, Yuva Soch” (Not extremist ideology but young thinking).

The newly inducted Congress General Secretary for UttarPradesh East Priyanka has been made in-charge of 43 out of 80 LokSabha seats in the state. 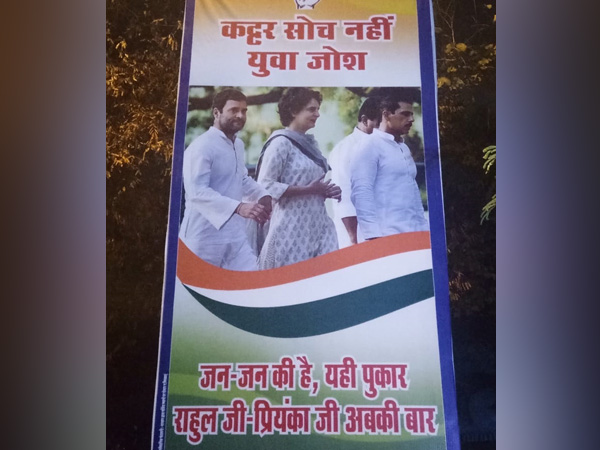 Priyanka, who was abroad for some time, arrived in the national capital on Monday. Soon after her arrival, Priyanka conducted meeting with Rahul and other prominent leaders of the party to review the ongoing preparations for the Lok Sabha polls.

A Congress leader from Uttar Pradesh told ANI on Monday that many prominent party leaders of the state were telephoned during the meeting and were asked about the welfare measures and development works being carried out ahead of the Lok Sabha elections.

Priyanka’s cabin is located next to Rahul Gandhi’s room at the party office.

It has not been cleared yet that who has put those posters outside the Congress headquarters. However, the picture of Priyanka’s husband Robert Vadra gives a political indication as the later will join Enforcement Directorate (ED) investigation in the 2009 petroleum deal case on Wednesday.

The Patiala House Court had granted interim bail to Vadra on Saturday till February 16 in connection with a money laundering case against him.

During the course of the hearing, the ED had told the court that they had learnt about more overseas properties related to Vadra and hence, said he should join the probe. It also said Vadra and his associates got kickbacks in the petroleum deal inked in 2009.

Priyanka also held a meeting on Tuesday at Rahul’s residence with other Congress leaders and discussed the strategy for Uttar Pradesh-East as she has been made the general secretary for the region.

Get the news updates on WhatsApp & Telegram by subscribing to our channels. For all the latest Politics updates, download our app Android and iOS.