A hashtag #RahulWaveInKazakh trended for a long time on Twitter yesterday. This hashtag was trending in response to an article by ANI where they exposed 10 Twitter accounts from various countries like Russia, Kazakhstan and Indonesia that had retweeted a tweet by Rahul Gandhi.

The ANI article was published at 1:05 PM and was tweeted by the Twitter account ani_digital at 1:12 PM. Soon, various mainstream media organisations picked up ANI’s article and the Congress and Rahul Gandhi were mocked at all day for allegedly using these suspicious accounts to boost their popularity.

Two tweets at 1:28 pm on October 21st were the first ones to use the #RahulWaveInKazakh hashtag with one of the tweets being that of BJP IT Cell head Amit Malviya, other one posted from a Twitter account called Dr Parag. This is where things get interesting. As we stated earlier, ANI’s article was published at 1:05 pm and was first tweeted at 1:12 pm. Let’s look at some of Amit Malviya’s tweets now. 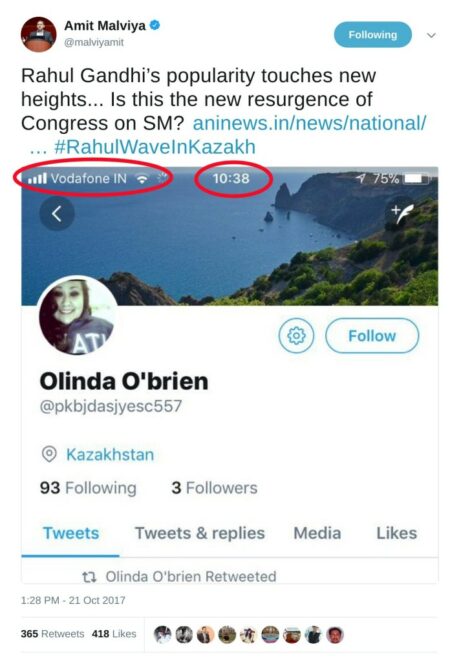 Let’s look at another tweet posted by Amit Malviya with the same hashtag. 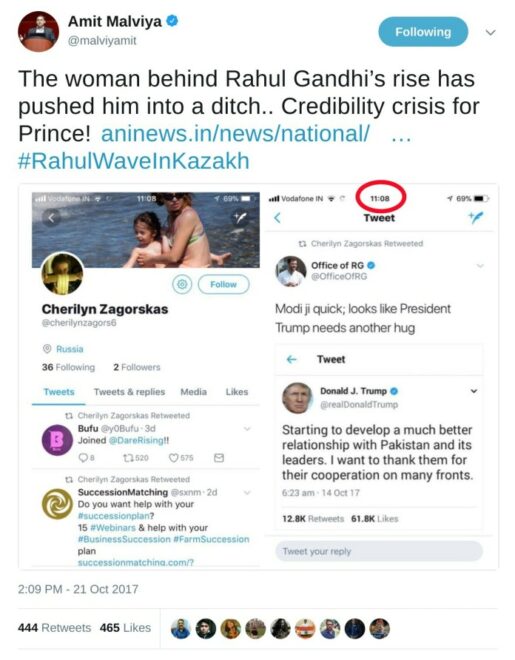 This time it is the screenshot of yet another account listed in ANI story – cherilynzagors6. Again, based on the timestamp shown in the screenshot posted by Amit Malviya, this screenshot was taken at 11:08, many hours before the ANI article.

Let’s look at a third screenshot posted by Amit Malviya while tweeting with the hashtag #RahulWaveinKazakh. 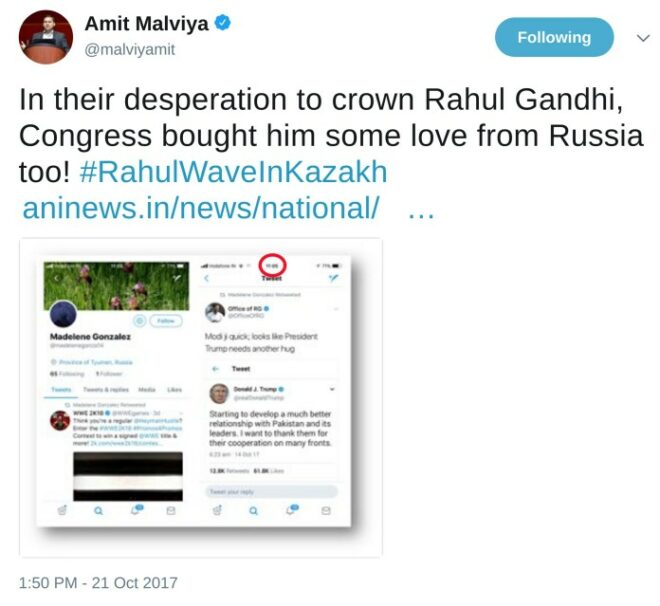 If one zooms into this image, the timestamp of the tweet is either 11:05 or 11:06. Again, the account in question madelenegonza14, features in the ANI story which is published much later.

This pattern of the screenshots being taken at a time earlier than the time when ANI story was published is not limited to these three accounts. We also came across a BJP social media volunteer Yogesh Malik who had shared a Google Doc with a long list of tweets and screenshots that members of BJP IT Cell could copy/paste. Yogesh Malik frequently shares these documents and was also part of the story by Alt News on BJP’s #DemonetisationSuccess trend. 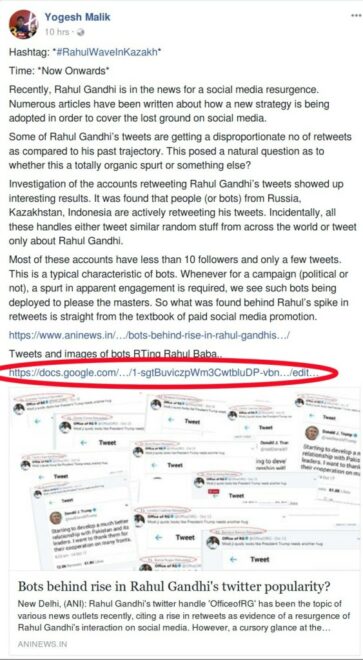 The link to the Google doc is as follows:

We have also made a backup of this document in case the original one is withdrawn.

This document not only has the screenshots that Amit Malviya posted but has screenshots of other Twitter accounts that were part of the ANI story. All the screenshots seem to have been captured from the same phone as indicated by the constantly decreasing battery power percentage of the phone.

The screenshot for the account charlot34583589 that was featured in the ANI story was taken at 10:28. 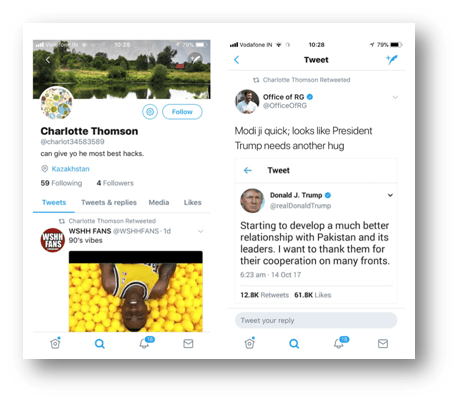 The earliest screenshot at 10:18 was of the account lawannapuchajd9 which is again a part of ANI’s investigation which was published much later at 1:05 pm. 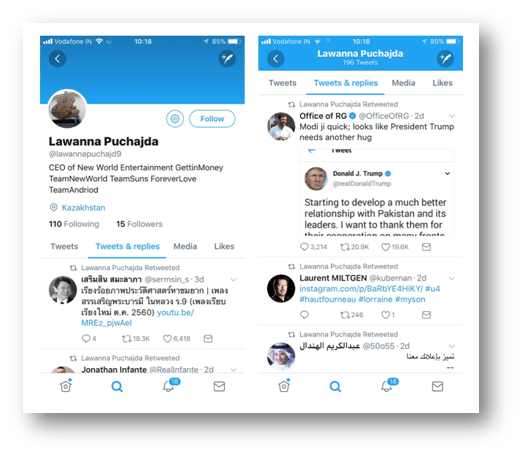 The Google doc has screenshots of each one of the 10 accounts that ANI ‘exposed’ and for every screenshot, the timestamp in the document circulated by BJP IT Cell is many hours before ANI article. Did BJP IT Cell have prior knowledge of the contents of ANI’s article?

The ANI article also skips over certain important facts. At least one of the accounts that retweeted Rahul Gandhi’s Twitter account also retweeted the tweets of BJP MP Parvesh Sahib Singh who is the Member of Parliament from West Delhi. 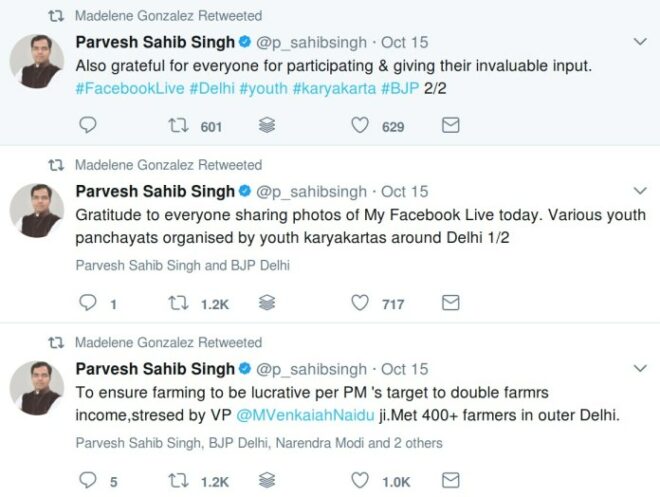 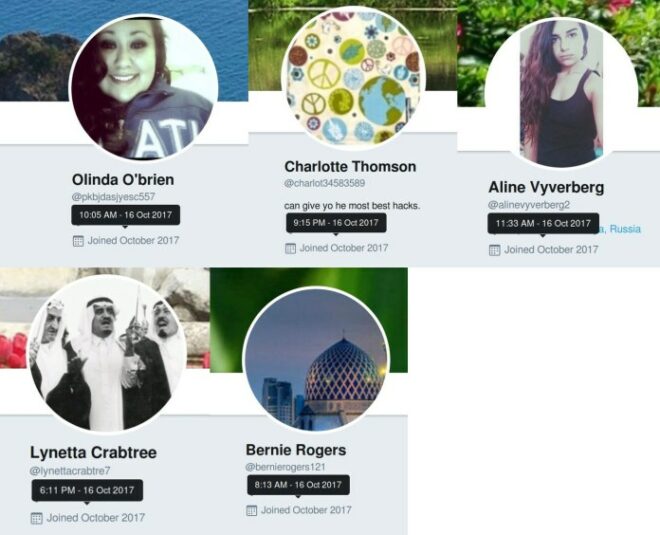 Another fact that ANI fails to mention is that each one of these 10 accounts had tweeted exactly 1 tweet of Rahul Gandhi. If these bots were indeed hired, it is strange that they haven’t retweeted any other tweets of Rahul Gandhi other than the one highlighted by ANI. That particular tweet received a total of 52,291 retweets+likes. Which would mean that ANI’s article was based on 0.02% of the reactions that exactly one tweet of Rahul Gandhi received. With a sample size of merely 0.02%, on what basis does ANI claim that this has lead to ‘increased popularity’? A claim like that could be made if one can show at least a reasonable bump in retweets+likes for every single tweet. Does ANI have the data to backup their claim?