New Delhi: Disney India has roped in singers Badshah and Armaan Malik for the Hindi version of ‘Aladdin’ movie.

While Badshah will shoulder the responsibility of creating the promotional song and video, Armaan will do the voice over for the Aladdin’s character.

Announcing the news, Indian film critic and trade analyst Taran Adarsh took to his Twitter handle and wrote, “Disney India ropes in Badshah and Armaan Malik for Hindi version #Aladdin. Badshah will create a promotional song and video. Armaan Malik will do the voice over for #Aladdin. #Aladdin releases on 24 May 2019 in English, Hindi, Tamil, and Telugu.” 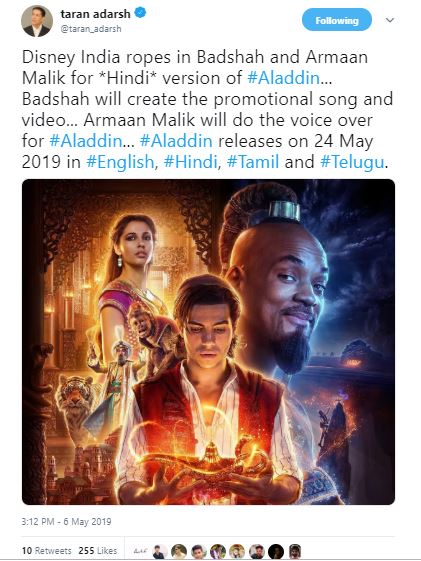 The trailer of the film came out in March gave a sneak peek into the miraculous world of Aladdin, the trailer also featured glimpses of the classic song “A Whole New World,” which will be a part of the adaptation.

The film is set to release in China on May 24, the same day as in North America. The film will be released in four languages Hindi, English, Tamil and Telugu.