New Delhi: The wait is over for the fans with the release of another song from film Kalank starring Alia Bhatt and Varun Dhawan. Dhawan took to his Instagram account to share the picture of the song. 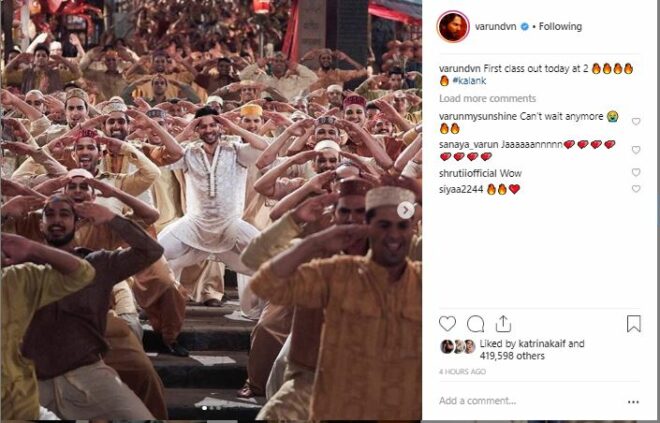 The song choreographed by Remo D’Souza features Varun Dhawan and Kiara Advani. The song has been composed by Pritam and sung by Arijit Singh. Bhatt took to her Twitter to share the video of the song.

The song begins with teary-eyed Bhatt sitting with Aditya Roy Kapur in the Mandap. As the song progresses, Dhawan makes a stunning entry with his energy-packed dance and later Advani joins him and dances with him.

With a star-studded cast of Alia Bhatt, Varun Dhawan, Madhuri Dixit, Sonakshi Sinha, Aditya Roy Kapur, and Sanjay Dutt, this period drama set in the 1940s India, is definitely going to take you on an unforgettable journey.

The film was originally conceptualized about 15 years back by late Yash Johar and his son Karan Johar, who has bankrolled the film. Abhishek Varman has helmed the period drama that releases on April 17 this year.