New Delhi: Ayushmann Khurrana is back with a bang in his fresh new cop avatar from his upcoming film ‘Article 15’. The first look poster of the actor was unveiled on Monday.

The Anubhav Sinha directorial film is inspired by the Badaun rape incident.

Speaking to ANI, Manoj Pahwa who is playing a vital role in the film, said, “This film is not completely based on the heinous crime that took place in Badaun where two girls were raped and hanged. We can say that this film is inspired by that incident and we have included some chunks of it.”

Playing a cop for the first time, the actor can be seen donning the attire of a no-nonsense police officer with an intense brooding face. Interestingly, the sunglasses worn by the actor says a lot more about the film and his character. In the lenses, bodies of two girls can be seen hanging from a tree which creates a lot more suspense.

On the other side of the lense, the viewers can spot a group of people protesting against the crime.

Today marks the completion of five years of the Badaun rape case where two teenage girls were gang-raped and gruesomely murdered by hanging them while they were still alive.

Interestingly, the teaser of the film will also be released today. While announcing the news on Twitter, Ayushmann shared the first look poster and wrote, “We have made a lot of difference, now it’s time to bring a difference. 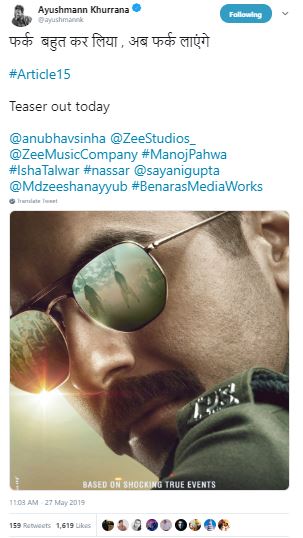 After ardently presenting a rather delicate and provocative subject matter in the critically acclaimed Rishi Kapoor and Taapsee Pannu starrer ‘Mulk’, director and producer Anubhav Sinha are now set to enthrall the audience with ‘Article 15’.

The film is being produced by Benaras Media Works and is slated to hit the theatres on 28 June.