New Delhi: After impressing the fans with his stellar performance in the film ‘Uri: The Surgical Strike’, Vicky Kaushal is all set to leave you haunted with his upcoming film ‘Bhoot: Part One.’

Vicky who has always managed to steal the limelight with his chocolaty looks and killer smile is going to give you goosebumps this time with his horrifying looks in the upcoming film.

The makers of the film released the first spine-chilling look poster of the film where the ‘Manmarziyan’ actor is looking extremely spooky. The 31-year-old is seen peeping out of a broken window of a ship with a face full of bruises. Covering the face of the actor was a fearsome hand with long nails which will leave you in terror.

Vicky shared the first look poster on his Twitter and wrote, “nothing haunts you more than reality. Presenting #Bhoot Part One – The Haunted Ship, directed by Bhanu Pratap Singh. In cinemas 15th November 2019.” 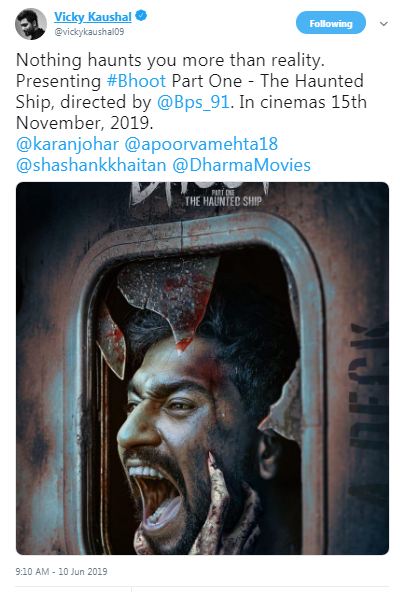 The horrifying roller coaster also stars Bhumi Pednekar who will be seen for the first time sharing screen space with Vicky. The film marks the directorial debut of Bhanu Pratap Singh.

An excited Bhumi posted a series of tweets and wrote, “Sinking my teeth into this special role in this very special film as my friend and brother Bhanu Pratap Singh marks his debut with Bhoot Part One – The Haunted Ship. In cinemas 15th November 2019” In another tweet, she wrote “Extremely excited for this one guys.” 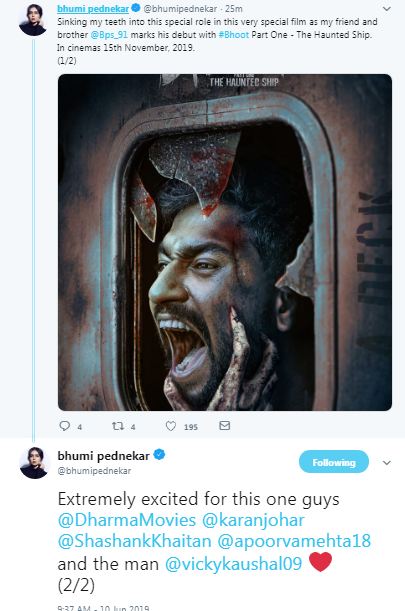 The film, which is slated to hit the theatres on November 15 this year, is produced by Karan Johar, Hiroo Yash Johar, Apoorva Mehta and Shashank Khaitan.

On Saturday, Karan Johar posted a cryptic message on his Instagram where he piqued the curiosity of his fans by a posting a picture which read, ” Film announcement on Monday! STAY TUNED!” 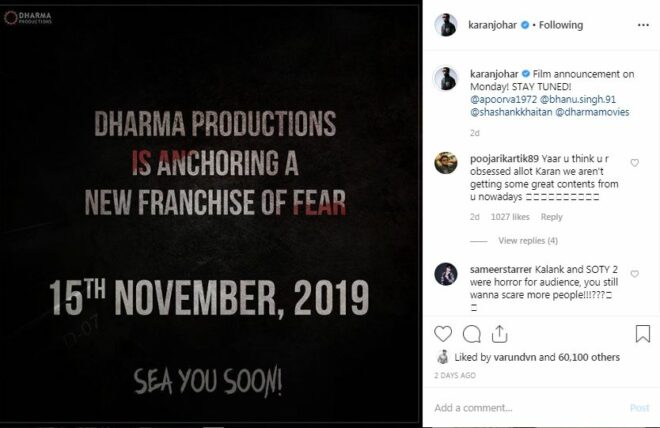 On the work front, Bhumi will be seen with Ayushmann Khurrana and Yami Gautam in ‘Bala’ and ‘Saand Ki Aankh’ alongside Taapsee Pannu. Vicky, on the other hand, is working in a film called ‘Sardar Udham Singh.’