Responding to a query from the News24 TV channel, he said: “The kind of remarks, statements made about Gandhiji and Godse is horribly wrong (bhayankar kharab). It is hateful, and these should be criticised and condemned in every which way. There is no place for such language, thinking in any civilised society. Those who do such things will have think a hundred times in future. It’s a different matter that she has apologised, I will not be able to forgive her from my heart.”

Anantkumar Hegde had tweeted: “Am glad that 7 decades later today’s generation debates in a changed perceptional environment and gives good scope for the condemned to be heard upon. #NathuramGodse would have finally felt happy with this debate.” 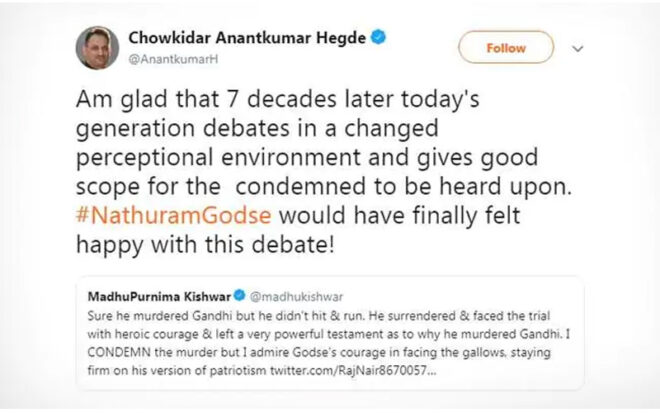 Shortly afterwards, he deleted the tweet and posted: “My Twitter account has been breached twice in the past one week and certain tweets have been posted on my timeline which has been discarded and deleted. Regret the posts attributed to me.”

My Twitter account has been breached twice in the past one week and certain tweets have been posted on my timeline which has been discarded and deleted. Regret the posts attributed to me.

In a tweet, Nalin Kumar Kateel, BJP MP and candidate for Dakshin Kannada, had tweeted in Kannada: “Godse killed one, Kasab killed 72, Rajiv Gandhi killed 17,000. You judge who is more cruel in this??” The tweet has now been deleted. 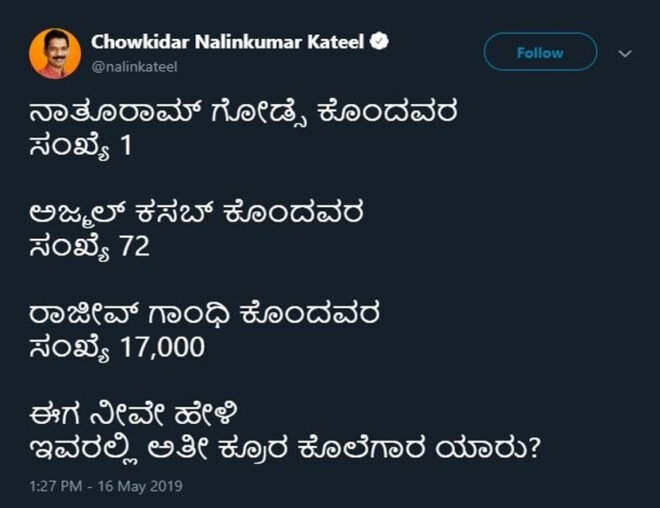 On Friday, he said: “I have noticed that my last two tweets have been criticized. I am sorry if someone has been hurt. I didn’t intend to hurt anyone’s feelings. Since I came to know my tweets were hurtful, I take them back. The discussion ends here.”

Saying the statements by the three leaders was against the party’s ideology, Shah tweeted: “The statements made by Pragya Thakur, Ananth Hegde and Nalin Kateel in the last two days are their own statements. The BJP has no relation with their statements.

“However, they have retracted their statements and also apologized. The BJP has taken a decision to send their statements to the Disciplinary Committee. The committee will submit a report within 10 days to the BJP after receiving the replies of the three leaders over their statements that are against the ideology of the party,” he said.

The Bharatiya Janata Party (BJP) President’s announcement came as the party faced criticism over the remarks ahead of the final phase of the Lok Sabha elections.

Thakur, an accused in the 2008 Malegaon blasts, was the first among the three party leaders to call Godse a “patriot”, leading the Election Commission to seek a report from the Madhya Pradesh Chief Electoral Officer.

Godse shot dead Mahatma Gandhi at a prayer meeting in New Delhi on January 30, 1948. He was hanged after a trial.