New Delhi: Just a few days ahead of the release of Salman Khan starrer ‘Bharat’, makers of the film are all set to treat the fans with a new song ‘Turpeya’ from the movie.

Announcing the release of the song on his Twitter handle, Salman Khan shared a picture and wrote, “Meri Mitti, Mera Desh!”

The photo features the ‘Dabangg’ actor in a chevron moustache, wearing a white navy uniform and a pair of classic black aviators with a golden frame. The patch of his cap reads ‘Eagle Marine’. 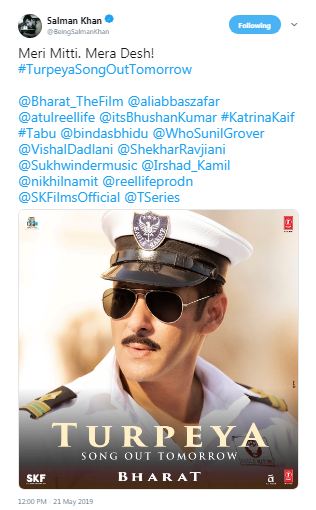 Spread over a span of 60 years, the film has some scenes recreating the partition of India. Director Ali Abbas Zafar had revealed in an Instagram post that shooting for those scenes was the most challenging.