New Delhi: Sports Authority of India (SAI) on Thursday said that they have not received “any request for assistance” from Asian Powerlifting Championship gold medallist Arthi Arun.

SAI made the revelation through Twitter. However, they assured to support Arthi in her “future endeavors as per government schemes”.

“The Sports Authority of India has not received any request for assistance from Arthi Arun. However, #SAI is happy to support her future endeavors as per Government schemes. @KirenRijiju @ANI,” SAI tweeted. 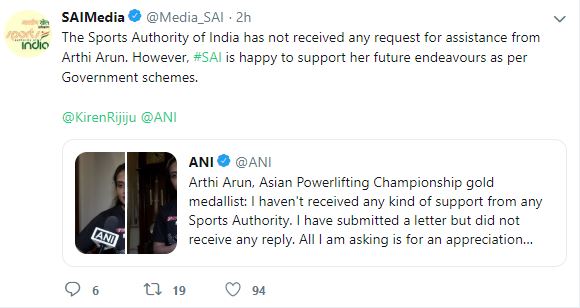 On Wednesday, Arthi said that she has not received any kind of support from the apex national sports body of India. She further added that she is just asking for an appreciation letter.

In an exclusive interview to ANI, Arthi said: “I haven’t received any kind of support from any Sports Authority. I have submitted a letter but did not receive any reply. All I am asking is for an appreciation letter. Is that too much to ask?”