New Delhi: Oscar-nominated film ‘Lagaan’ clocked 18 years today. The iconic movie starring Aamir Khan not only acclaimed for the storyline but was also a blockbuster.

Released in 2001, ‘Lagaan’ is a period sports drama. The story revolves around a tiny village of the Victorian era where people were burdened with high taxes. The story takes a turn when an officer challenged the villagers to play cricket as a wager to avoid taxes. In a bid to improve their conditions, the villagers accept the challenge, learns the game and emerge victorious at
the end of the film.

As the movie completed 18 years, Aamir Khan thanked Ashutosh Gowariker who had written and directed the epic movie, in a post on Instagram.

“Thank you @AshGowariker, and thanks to everyone who has been a part of Lagaan. What a memorable and beautiful journey,” he tweeted. 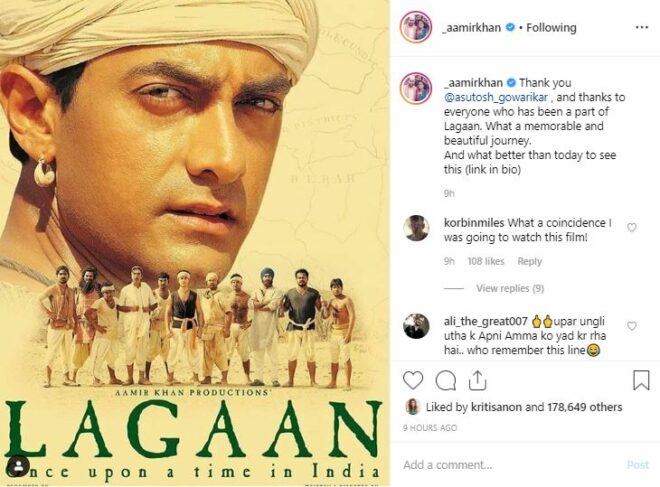 ‘Lagaan’ produced by Aamir was nominated at the Oscars 2002 in the Best Foreign Language film.

The movie that locked horn with ‘Lagaan’ was ‘Gadar: Ek Prem Katha’ that set the cash registers ringing.

Though both the movies are a period drama, ‘Gadar: Ek Prem Katha’ starring Sunny Deol and Amisha Patel is more of a romantic drama.

Movies like ‘Lagaan’ sets is a benchmark for the industry and are meant to be cherished forever.