New Delhi: Madame Tussauds Delhi is set to get another occupant. Singer-actor Diljit Dosanjh’s wax figure will be unveiled on Thursday (March 28) at the wax museum.

The statue was initially scheduled to be revealed on February 28 but was postponed in the wake of mourning over the Pulwama terror attack.

Ahead of the release of his figurine, Diljit shared the news with his pic on Instagram. 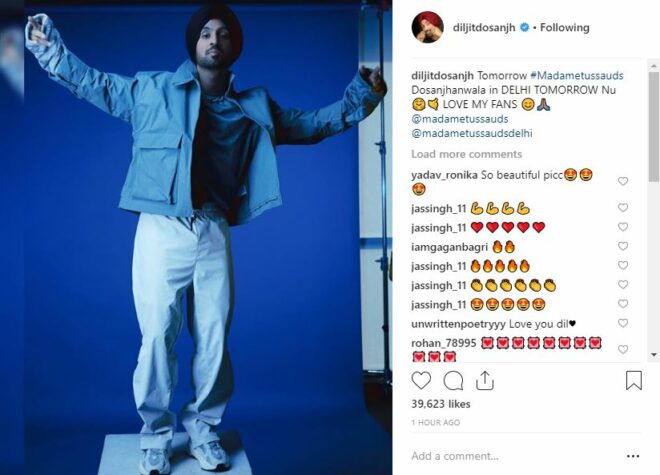 The ‘Udta Punjab’ actor had earlier said that amidst rising tensions between India and Pakistan, he would stand with the Indian Army and thus will reschedule the unveiling of his statue.

“Our soldiers are fighting hard to protect the Nation. We stand by our Soldiers. Amidst the tensions rising across the Nation, have decided to re-schedule the launch of #MadameTussauds WAX Statue Will Post New Date Soon @MadameTussauds @tussaudsdelhi #BringBackAbhinandan,” he had tweeted.

The actor had also previously donated Rs 300,000 to the wives of the CRPF personnel who lost their lives in the Pulwama terror attack. He had shared a snapshot of the receipt on his social media and had urged his followers to contribute to the welfare of the martyrs’ families.