The filmmaker went onto share that how much the film, that was conceptualized 15 years ago and one on which even his late father Yash Johar worked on, meant to him.

Taking to his Instagram account, KJo shared a sneak peek from the world of ‘Kalank’. He also asked the fans to ‘stay tuned for more’ on Thursday.

The photo features a man and woman in a boat, surrounded by large flowers in a lake. The woman is dressed in an all white outfit while the man rows her boat. However, the picture doesn’t reveal the face of the duo.

“A film that was born in my heart and mind 15 years ago….a film I passionately believe in…the last film my father worked on before he left us….it was his dream to see this film come through…I couldn’t fulfill his dream then….my spirit was broken….but today his wish has found a relationship with celluloid….the story of turbulent relationships and eternal love has found a voice….the film has been woven, nurtured and visualized by ABHISHEK VARMAN….and the film Is KALANK!

Set in the ’40s but it’s heart lives on…..TOMORROW the journey begins…..am excited …anxious and emotional about this one…I do hope you join us on our path to undying love…..#KALANK,” he wrote. 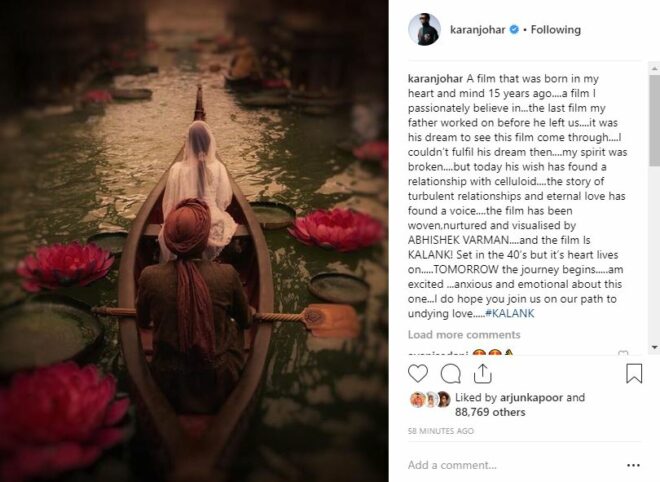 Set in the 40s, the film was envisioned by Yash Johar and Karan tried to make it a reality.