The elder one, Karisma, has been documenting her exotic holiday by sharing beyond adorable pictures on social media.

The actor added another beautiful picture to her London diaries which feature the stunning siblings with none other than Nita Ambani.

In the photo shared on Instagram, Kareena looks simple yet chic in a black sweatshirt with blue pieces of denim and neatly tied hair while Karisma looks beautiful in a black-and-white striped sweater and jeans, bright lips and hair left loose. On the other hand, Nita looks elegant-as-ever in an all-white outfit and straight hair.

Going by Karisma’s post, it seems like the ladies had a good time together. The actor captioned, “Wonderful afternoon” with heart emojis. 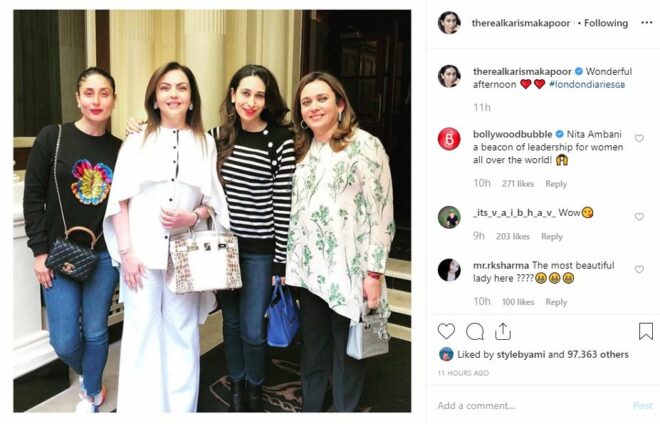 Karisma, who is quite active on the photo-sharing application, has been treating her fans with pictures of her exotic vacation which are now viral on social media.

In one of the previous posts shared by the actor, she could be seen chilling with Kareena and her son Taimur. The caption read: “Lazy Saturday.”

On Saturday, Karisma gave us a glimpse of her happy family time with her daughter Samaira, son Kiaan, Kareena and Taimur. She captioned the post “love.”

Several other pictures of Kareena with her family from her trip were shared by fan pages dedicated to the actor.

On the work front, Kareena, who was last seen in the 2018 film ‘Veere Di Wedding’, will next star in ‘Good News’, co-starring Akshay Kumar, Kiara Advani, and Diljit Dosanjh. She will also feature in ‘Angrezi Medium’ alongside Irrfan Khan and Karan Johar’s magnum opus ‘Takht’.

Karisma will be next seen in Alt Balaji’s show ‘Mentalhood’, which also marks the actor’s digital debut.