Striking a picture perfect pose, the actor shared the picture of her meeting with the Nayyar on Instagram. Karisma looked stunning in lustrous rose gold and black outfit with red lips while Nayyar kept it simple yet trendy in blue formals.

“Big Bang night! with Kunal Nayyar,” she captioned the picture. 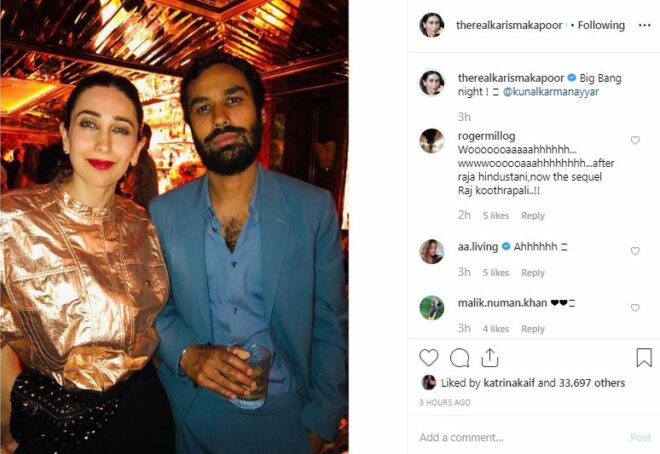 Karisma, who is quite active on the photo-sharing application, has been treating her fans with pictures of her exotic vacation which are now viral on social media.

In one of the previous posts shared by the actor, she could be seen chilling with Kareena and her son Taimur. The caption read: “Lazy Saturday.”

In the other post, she can be seen sharing a frame with her mother and sister Kareena Kapoor Khan. She was also seen spending quality time with her children, Samaira and Kiaan Raj Kapoor in London.

On the work front, Karisma will be next seen in Alt Balaji’s show ‘Mentalhood’, which also marks the actor’s digital debut.