New Delhi: Makers of Salman Khan starrer film ‘Dabangg 3’ just spilled the beans about the climax shoot of the film.

Kichcha Sudeepa, who is essaying the antagonist in the film made the major revelation about the climax of the film on his Twitter handle. “Climax shoot for #Dabangg3 has been very hectic yet a great experience. Huge set n a Humongous Team.

Bare body fight against Salman Khan is the least I had ever thought of doing, everrrr. The actor gave a hint to the frenzy fans that he had a “bare body fight” with the ‘Sultan’ actor in the climax scene.

A few days back the ‘Makkhi’ actor posted a picture with Salman where he can be seen striking a pose with him during their workout sessions. 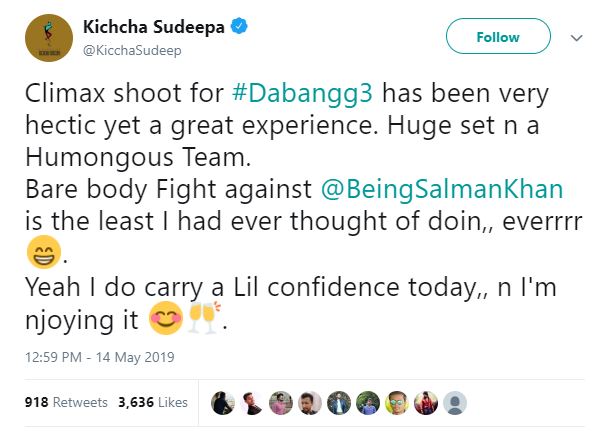 “Stay tuned for a surprise,” he had captioned the picture.As per media reports, Sudeep will essay the role of a villain in the movie and will be seen in an intense face-off with Salman. While Salman’s pictures from the sets of ‘Dabangg 3’ are going viral on the internet, Sudeep’s look has been kept under wraps.

Earlier installments of the hit franchise starred Sonu Sood and Prakash Raj in the negative roles.

Meanwhile, Sonakshi Sinha reprises her role opposite Salman. Sonakshi, who made her Bollywood debut with the 2010 movie ‘Dabangg’, plays Rajjo in the film.

The actor had earlier shared the look of her character on her Instagram account when she started shooting for the film.

The actor kicked off the shoot for the film on April 1 when he jetted off to Maheshwar, Madhya Pradesh to shoot with Arbaaz Khan and Prabhu Deva. 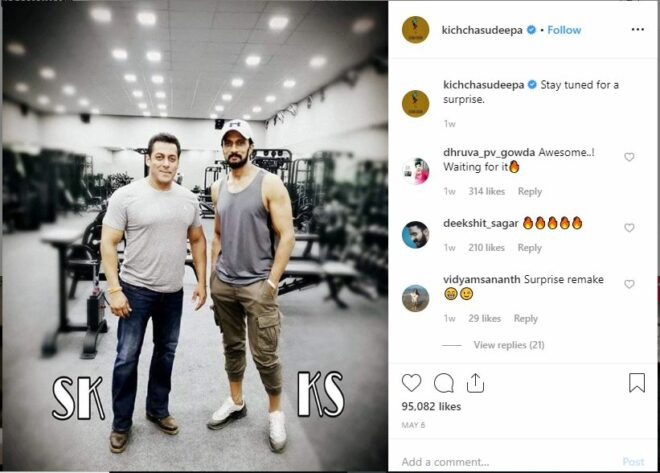 Salman has been keeping the audiences on their toes by sharing stills and behind-the-scenes pictures from the film’s sets on his social media handles.

‘Dabangg 3’ is being helmed by Prabhu Deva. The film marks the second collaboration of Salman and the director. The two have previously worked together in ‘Wanted’.

The film is scheduled to release on December 20.