Washington: Good news for all the Mandy Moore fans as the actor-singer is back! She is working on some new music with her husband Taylor Goldsmith.

After a long hiatus of about 20 years, Moore is making a comeback to the music scene and she shared the update with her fans on her Instagram account.

Teasing new music, the ‘This Is Us’ actor, shared a series of pictures featuring her in a recording studio.

“In the middle of making new music with some of my favorite people ever. Can’t WAIT for you guys to hear what we’re cooking up,” she captioned the post. 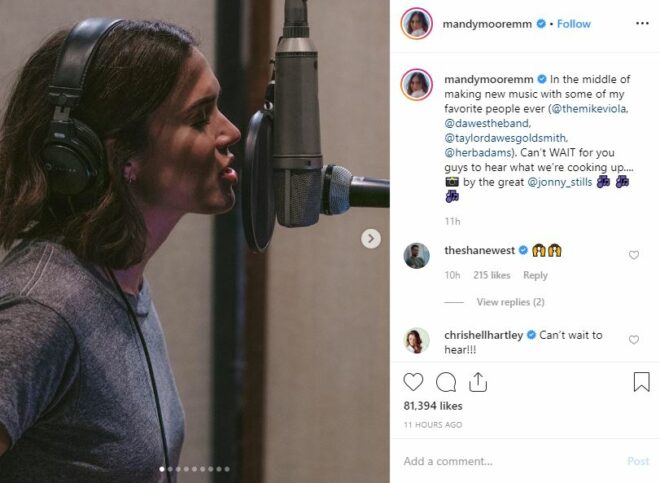 The singer tagged her husband Taylor Goldsmith, and his band the Dawes, who is seemingly helping out with the upcoming project.

It has almost been 20 years since Moore released ‘Candy’, the debut single from her first album ‘So Real’. With the help of the track’s iconic music video, Moore burst onto the pop music scene alongside singers like Britney Spears and Christina Aguilera, reported E! News.

Over the years, Moore has been focused on acting and delivering incredible performances, but going by her recent post, it seems that she never lost her passion for music.

Earlier this year, Moore had confirmed that new music was coming during her interview with Busy Philipps on ‘Busy Tonight’.

“I’m working on music again, which is so exciting,” she said.

Apart from working on new music, Moore will be seen in Roland Emmerich’s ‘Midway’.