BENGALURU: “Muslims in Bangalore have named a mosque after @narendramodi Ji. Dont know how many are going to commit suicide after seeing this.”

The above message claims that a mosque in Bengaluru has been named after Prime Minister Narendra Modi. It has been tweeted by a user @mahesh10816, who is followed on the platform by PM Modi himself.

Muslims in Bangalore have named a mosque after @narendramodi Ji. Dont know how many are going to commit suicide after seeing this 😃😃😃 https://t.co/ERpRfyIxl7 pic.twitter.com/w9k6RDEGNQ

The above tweet has been retweeted over 400 times. Two photographs have been posted along with it. In the photo on the left, the words ‘Modi Masjid’ can be seen written at the entrance of what appears to be a mosque. In the photo on the right, a poster of PM Modi can be seen in the background. The aforementioned claim has gone viral on WhatsApp as well.

Muslims in Bangalore have named a mosque after Narendra Modi Ji. Dont know how many are going to commit suicide after seeing this 😃😃

Apart from this mosque at Tasker Town, there are two more mosques are in Bengaluru known as Modi Masjid and are located around Tannery Road.

Gulaam Rabbani, the Imaam of the grand Modi Mosque at Tasker Town in east Bengaluru, speaking to NDTV said, “This mosque is almost 170 years old and our PM is approximately 69 years old. There is no connection between PM Modi and this mosque.” Rabbani has been serving there for over two decades. 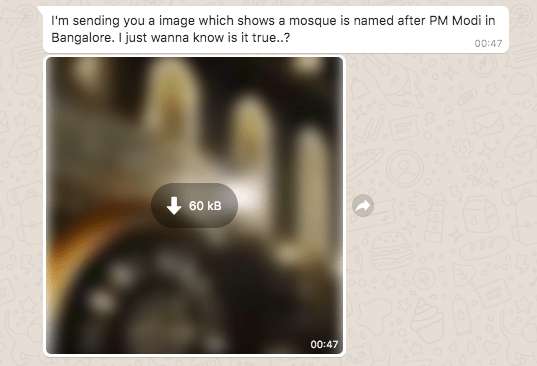 NOT NAMED AFTER NARENDRA MODI

Alt News found that there is indeed a Modi masjid in Bengaluru, but it has NOT been named after PM Modi. It has been named after a samaritan named Modi Abdul Gafoor, and was established more than 175 years back. The mosque was recently renovated, which is why it was in the news. It is in the Shivaji Nagar area of the city.

The claim that a mosque in Bengaluru has been named after PM Narendra Modi, is false.