Myanmar’s military is shelling villages and preventing civilians from getting food and humanitarian help, amid an intensifying crackdown on the rebel Arakan Army in the restive northwestern state of Rakhine that has pushed thousands from their homes, Amnesty International has said.

The human rights group said on Monday its investigations also found that the security forces had used vague and repressive laws to detain civilians in its battle against the Arakan Army, an ethnic Rakhine group that is fighting for more autonomy.

“These latest operations are yet another reminder that the Myanmar military operates without any regard for human rights,” Tirana Hassan, Amnesty’s director of crisis response, said in a statement. “Shelling inhabited villages and withholding food supplies is unjustifiable under any circumstances.”

Fighting between the military and Arakan Army intensified in January after the rebels attacked a police post leaving 13 officers dead.

The military responded by deploying more troops to the region, the site of a massive crackdown on the Rohingya Muslim minority in 2017, in an attempt to “crush” the fighters. The United Nations says some 5,200 people had been forced from their homes on January 28, as a result of the conflict.

There was no immediate response from the Myanmar authorities to Amnesty’s report. 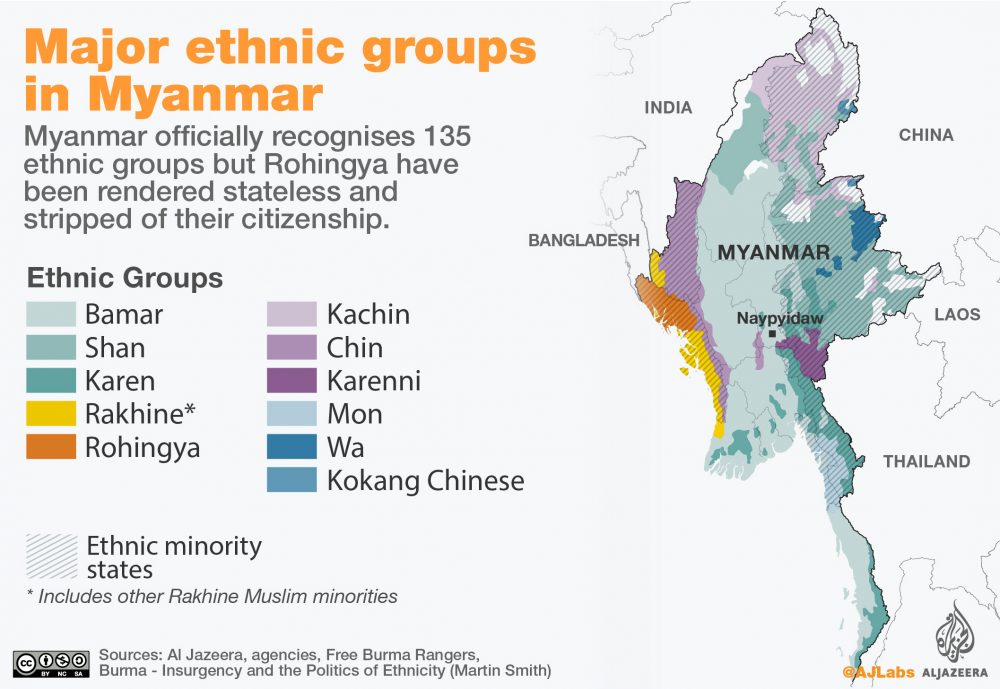 Amnesty said it had spoken to people affected by the fighting, as well as to local activists and humanitarian workers to get an understanding of the effects of the latest unrest. It said most of those forced to flee were Buddhist and included minority Mro, Khami, Daingnet and Rakhine people. Myanmar has about 135 different ethnic groups.

It noted that unlawful tactics had been a “hallmark of the military’s operations against armed groups” and that previous operations in Kachin and northern Shan states had killed and wounded civilians and displaced thousands. It added that the troop build-up in Rakhine included the 99th Light Infantry Division, a unit Amnesty and others had previously implicated in atrocities against the Rohingya in August 2017.

Two villagers who spoke to Amnesty said that they had fled their homes under military bombardment and when they returned to collect belongings discovered money and other valuables were missing. They suspected soldiers of the theft because troops had been expected to secure the area.

Another said Myanmar soldiers and police had restricted the amount of rice that people in her village could bring into the settlement even though they were already suffering from a shortage of basic foods because fighting in December had prevented them from harvesting their crops. As a result, they abandoned the village, as had other people in settlements nearby.

“We talked among ourselves that it was impossible to live in our village any more,” the 34-year-old woman from a remote ethnic Mro village in Kyauktaw Township told Amnesty. “We didn’t want to move to a (displaced persons) camp, but we couldn’t trade what we found in the forest and we couldn’t get through enough supplies.”

The unrest has also spilled over into neighbouring Chin State where locally-based human rights monitors say the sporadic violence and escalating military presence in its southern part is affecting local communities.

An update from the Chin Human Rights Organisation (CHRO) that was released on Sunday said the military had imposed restrictions on movement and a curfew in three villages after troops moved into a nearby town. Residents told CHRO more than 50 military vehicles had arrived in Matupi Town, checkpoints had been erected and that there were regular helicopter flights in and out of the area.

Despite the unrest in Rakhine, the Myanmar authorities have made it more difficult for aid groups to work in the region, Amnesty said. On January 10, the Rakhine government barred all UN agencies and international organisations with the exception of the Red Cross and the World Food Programme from operating in the five conflict-affected townships.

“The Myanmar authorities are deliberately playing with the lives and livelihoods of civilians,” Hassan said. “As we’ve seen time and again, the military’s priority is not to protect people in the crossfire, but rather to hide their abuses from the international community.”

Amnesty said it had also gathered evidence that the military and police were abusing the law to detain and prosecute civilians, including Aung Tun Sein, a Mro village leader who had been picked up in the wake of an outbreak of fighting in the area around his village in mid-January and remained in jail. Ten other men held with him were released.