New Delhi: As actor Neena Gupta on Wednesday wrapped up shooting for her part in upcoming sports film ‘Panga’, director Ashwiny Iyer Tiwari couldn’t have a message sweeter than this for her!

“Today was Neena Mam’s last day on Panga All I can say is we go beyond the actor-director relationship,” Ashwiny wrote on Instagram.

Detailing her relationship with the veteran actor, the director expressed that the two are ‘friends for life’ and went on saying, “We are friends for life who chat about everything under the sun. There were times when we had a serious overwhelming talk too that went into smiles of transparent innermost thoughts.”

“That’s how we understood each other,” she added.

After singing praises of Neena, Ashwiny summed up her post by thanking her and wrote, “In silence. In the expression of oneness. Thank-you so much for your precious time and role and making Panga a part of you. I am great full for life and our story of friendship will only continue.”

She also shared a selfie with the actor in her post.

While Ashwiny showered all her love on Neena, the latter also reciprocated the love in comments as she wrote, “Love you.”

Swara Bhaskar also complimented Neena in the comments by writing, “Ma’am is the BEST! Nuff said!!” 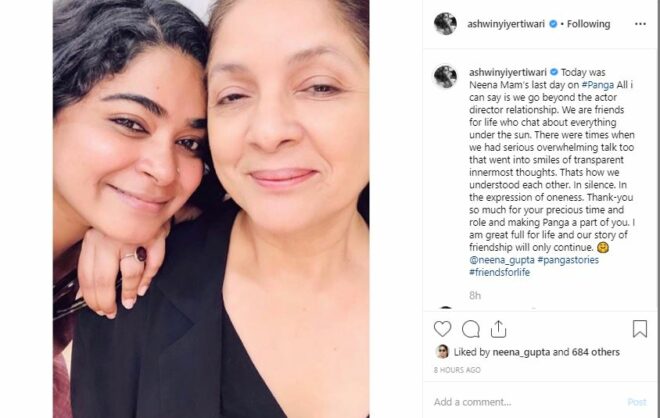 The last schedule of the film shooting began somewhere earlier in June as the director herself revealed through a post.

Richa Chaddha who will also be seen in a significant role in the movie wrapped up shooting in June after which Ashwiny thanked her for ‘bringing out the best of her’.

The upcoming sports-drama will feature Kangana as a Kabaddi player. Apart from her and Richa, the film will also feature Punjabi singer Jassie Gill, and Neena Gupta in the pivotal roles. ‘Panga’ is scheduled to release next year on January 24.

Kangana is also awaiting the release of her upcoming film ‘Mental Hai Kya’ where she will be seen sharing the screen with Rajkummar Rao.