New Delhi: After impressing fans with the soulful voice in Kesari, Parineeti Chopra started preparations for her upcoming Hindi remake of the popular thriller ‘The Girl On The Train’.

Adding to the excitement, the actor posted a picture on Instagram from her script reading sessions along with something close to her heart.

The ‘Namaste England’ actor shared the picture of her script along with a coffee mug which was gifted to her 7 years back by Sahaj Chopra.

“Prep Girl On The Train (Also meet my 7 yr old coffee mug that I cannot live without! I use it every day. Take it everywhere. It was Sahaj Chopra’s first ever gift to me so its super special.),” she wrote. 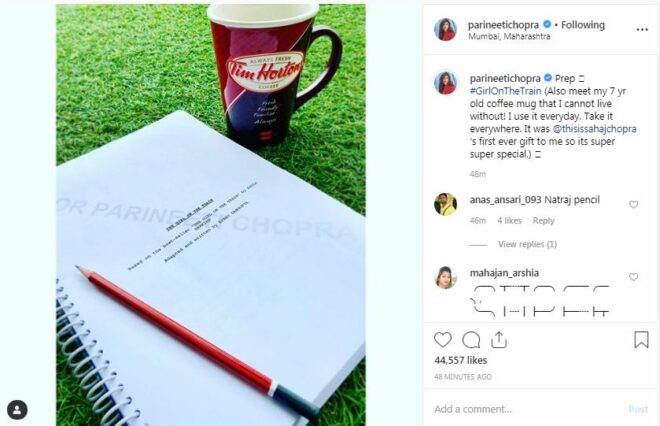 According to Indian film critic Taran Adarsh, the remake has not been officially titled yet. The film is expected to go on floors in the UK this July. The upcoming film will be directed by Ribhu Dasgupta and produced by Reliance Entertainment and Amblin Entertainment. The makers of the film are eyeing a 2020 release.

Paula Hawkins’ 2015 bestseller, ‘The Girl On The Train’ was adapted into a Hollywood film by Steven Spielberg’s DreamWorks Pictures. The film was directed by Tate Taylor. Emily Blunt, who starred as the lead, received a nomination for her performance at the 23rd Screen Actors Guild Awards, as well as a BAFTA nomination for Best Actress in a Leading Role.

READ:  I was lucky enough to get best mentors: AR Rahman

As per media reports, Parineeti will play an alcoholic divorcee, who becomes involved in a missing person’s investigation in the film.

Apart from this film, Parineeti also has other movies in the pipeline including ‘Jabariya Jodi’ with Sidharth Malhotra, ‘Sandeep Aur Pinky Farrar’ alongside Arjun Kapoor, Saina Nehwal’s biopic and multi-starrer ‘Bhuj: The Pride Of India’.