Panaji: Wrapped in tricolour, the mortal remains of Goa Chief Minister Manohar Parrikar on Monday arrived at BJP headquarters in Panaji from his private residence in Dona Paula.

Goans have gathered in large numbers outside the BJP headquarters to pay last respects to the 63-year-old leader, who passed away yesterday. 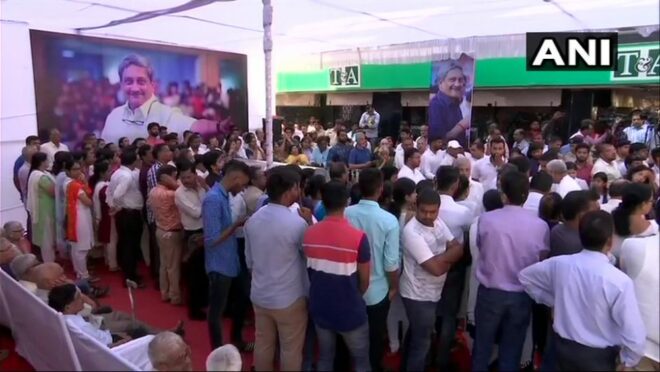 Union Minister Nitin Gadkari also reached the venue to bid a final adieu to his former cabinet colleague, who breathed his last on Sunday evening at his residence after battling a pancreatic ailment for months. 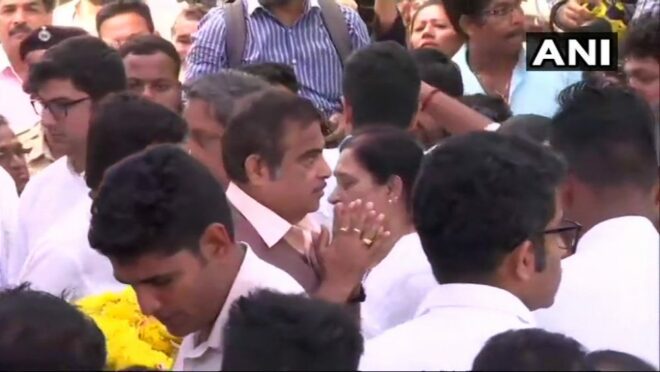 Temporary fences have been erected at Kala Academy in Panjim to let visitors enter the premises systematically.

Citizens have already started queuing outside the institute to pay their last respects to Parrikar. The public can pay homage to Parrikar from 11 am to 4 pm and last rites will be performed at five in the evening at Miramar.
Parrikar will be accorded state funeral with full military honours at Miramar beach.

The High Court of Bombay at Goa and District Courts in the state will remain closed today in view of Parrikar’s demise.

The state of Goa will also be observing seven-day mourning to grieve the loss of late chief minister.

The Centre has already announced National Mourning on March 18.

A four-time Chief Minister of Goa, Parrikar had been in and out of the hospitals since February last year. It was in October last year that the state government made a formal announcement about the BJP leader suffering from a pancreatic ailment. He had undergone treatment in the United States as well as in New Delhi.