The lead actor of the film, Kartik Aaryan took to Twitter and posted a photo from the sets of the film, captioning it “First Day with Patni or Woh ? Clap to b removed soon.” 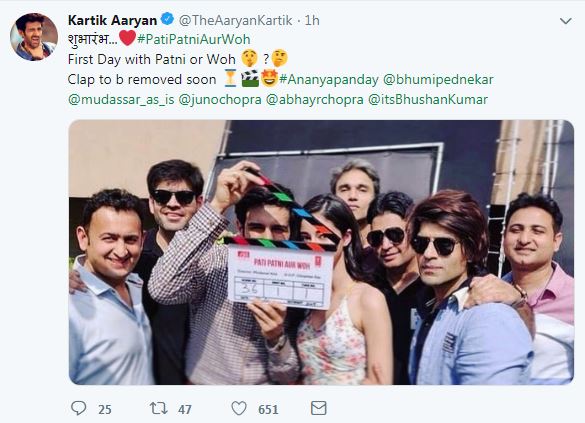 The remake of the 1978 film is being directed by Mudassar Aziz, who has previously helmed films like ‘Dulha Mil Gaya’, ‘Happy Bhag Jayegi’ and ‘Happy Phirr Bhag Jayegi’.

The film is an adaptation of the 1978 drama with the same title, which featured Sanjeev Kumar, Vidya Sinha and Ranjeeta Kaur in the lead roles. The film revolves around Ranjeet (Sanjeev), who has a son with his wife Sharda (Vidya) and is also involved with his secretary Nirmala.

The film will see Bhushan Kumar (of T-Series), Abhay Chopra and Juno Chopra (of BR Studios), once again join forces after ‘Bhoothnath Returns’.