New Delhi: Bollywood actors, like all of us, too have their firsts! Priyanka Chopra, who featured in the Jonas Brother’s comeback single ‘Sucker’, recently attended her “first ever” Jonas Brothers’ concert in Atlanta.

Ticking off a Jonas Brothers show from her bucket list, Priyanka shared her excitement by posting pictures from the concert and summed up her experience in just one word, “incredible.”

“My first ever #jonasbrothers show. And it was incredible!!! I’m so proud of these guys!! #Family,” she wrote alongside pictures from the concert.

In the first picture, a happy Priyanka can be seen posing with the Jonas Brothers- Nick, Joe, and Kevin. 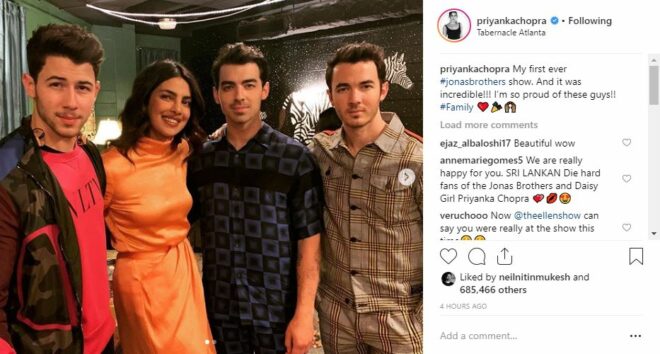 In the second picture shared by the actor, she can be seen posing for a happy family picture which features her with not just the Jonas Brothers but also Nick Jonas’ parents Denise and Paul Kevin Jonas and the youngest of the Jo-Bros – Franklin. 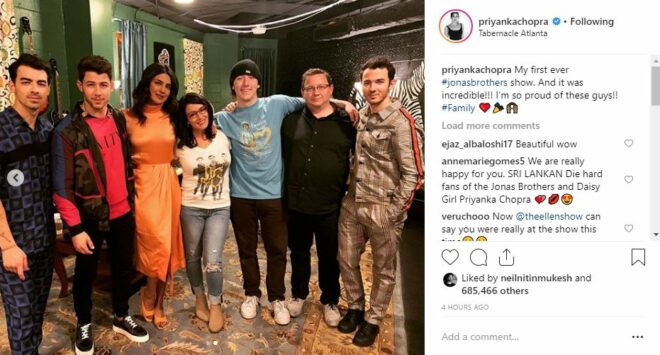 Priyanka also posted a couple of clips on her Instagram stories from the fun show.

Priyanka’s family time with the brothers wasn’t restricted to just the concert. The 36-year-old actor also cheered for Franklin Jonas as he completed his graduation.

Giving a sweet shout-out to the youngest brother, Priyanka shared an adorable Instagram post that read, “The man of the hour!! @franklinjonas we r so proud of u.. “Graduate” ! Can’t wait to witness what else u will accomplish in your life. To bigger and greater heights! Love u @theblackbirdacademy.” 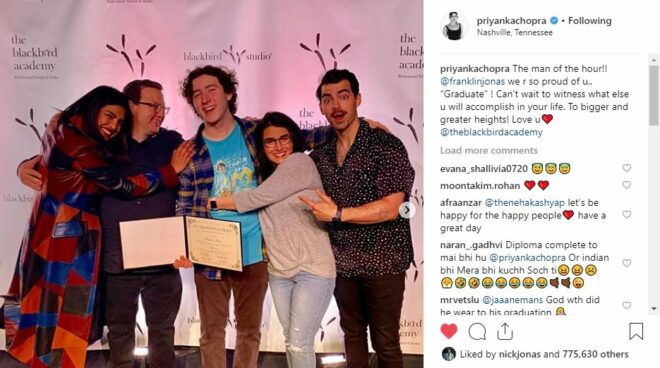 Meanwhile, on several shows, Priyanka has confessed that she was not as well versed with the Jonas Brothers’ musical legacy. On an episode of the popular show ‘Koffee With Karan’, she skipped the question about the boy band’s first album and jokingly said: “I didn’t google him (Nick) before marrying him!”

On the work front, Priyanka will be making her Bollywood comeback with Sonali Bose’s upcoming directorial ‘The Sky Is Pink’. It also features Farhan Akhtar, Zaira Wasim, and Rohit Saraf.