New Delhi: Bollywood actor Sonam Kapoor, who loves experimenting with her style and fashion, paid a heartfelt tribute to German director and one of the biggest names in the fashion industry the late Karl Lagerfeld.

The famous fashion designer died at the age of 85, to pay her respects, Sonam took to her Instagram account to share a picture and captioned it with a long quote by Karl himself. The picture features her with the late designer and Frieda Pinto.

She wrote, “Please don’t say I work hard. Nobody is forced to do this job and if they don’t like it, they should do another one. If it’s too much, do something else. But don’t start doing it and then say, ‘Aaaah, it’s too much’.

Because a lot of people depend on it. What we do at Chanel, thousands of people work on these things; these things are sold in hundreds and hundreds of shops all over the world. People like the big machine, and the money the big machine involves, but the effort… Then, suddenly, they become artists. They are too weak. Too fragile. Non.

We have to be tough. We cannot talk about our suffering. People buy dresses to be happy, not to hear about somebody who suffered over a piece of taffeta. Me, I like to make an effort. I like nothing better than concrete reality.

I’m a very down-to-earth person, but it is my job to make that earth more pleasant. KARL.” 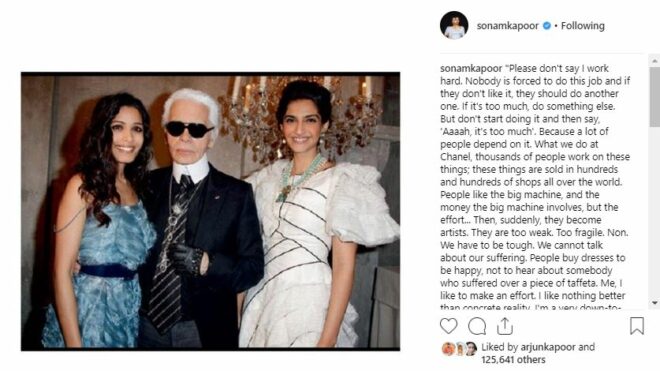 Reportedly, Karl died on Tuesday at the age of 85 in a hospital in Paris after suffering from an illness.

The talented designer has served as the creative director of brands like Chanel and Fendi. His final collection for Chanel was January’s Spring/Summer 2019 haute couture show, which was unveiled in Paris this January.

Many other celebrities including Bella Hadid, David Beckham, Eva Chen, among others paid tribute to the late designer.

Meanwhile, on the work front, Sonam was last seen in the film ‘Ek Ladki Ko Dekha Toh Aisa Laga’ alongside Rajkummar Rao and her father Anil Kapoor which centres around the acceptability of LGBTQ community and their love preferences in our country. The film received an overwhelming response by the critics and audiences alike.

She will be next seen in ‘Zoya Factor’. Helmed by Abhishek Sharma, the movie also stars Dulquer Salmaan and Sanjay Kapoor in pivotal roles and is based on the novel written by Anuja Chauhan.