New Delhi: Much-awaited film ‘Student of The Year 2’ had a decent start by clocking Rs 12.06 crore worth business on its first day.

Film critic Taran Adarsh posted a series of tweets and highlighted the first-day box office collection of the romcom. “Student of the Year 2 puts up a fairly good total on Day 1… Biz slowed down towards evening shows… Sat and Sun crucial… Substantial growth – especially at plexes – is essential for a healthy total… Fri Rs 12.06 cr. India biz. #SOTY2 is Tiger’s second highest opener *so far*,” he wrote. 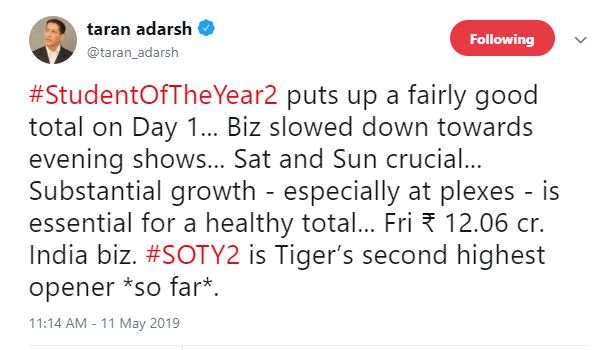 In the second tweet, Taran gave a list of the films starring Tiger Shroff and their first-day collections. ‘SOTY 2’ takes the second highest-opener spot for the actor, after ‘Baaghi 2’. 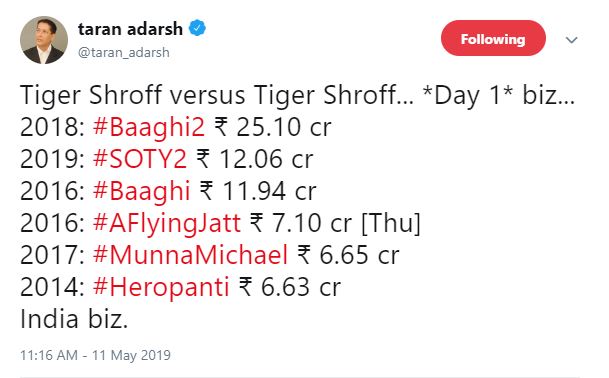 ‘Baaghi 2’ emerged as the clear winner for Tiger with debut earning of Rs 25.10 crore, while ‘Student of the Year 2’ is a distant second with Rs. 12.6 crore.

‘Student of the Year 2’ is the sequel to the 2012 hit ‘Student of The Year’, which marked the Bollywood debut of Alia Bhatt, Varun Dhawan, and Sidharth Malhotra.

This installment marked the debut of Ananya Pandey and Tara Sutaria.

The film also has a special appearance by Hollywood star Will Smith along with Alia Bhatt, the ex-student from the prequel, gracing a special number with Tiger- ‘Hook Up Song’.

Helmed by Punit Malhotra and produced by Karan Johar, the film had hit the screens on May 10.