New Delhi: Ace filmmakers Karan Johar and Aditya Chopra have been instrumental in shaping Shah Rukh Khan’s career. Both the directors gave SRK and his fans some of the most beautiful films.

Aditya and KJo made their directorial debuts with films starring SRK. Aditya directed SRK in ‘Dil Wale Dulhania Le Jayenge’, co-starring Kajol, which is hands-down every fan’s favorite film. SRK as Raj and Kajol as Simran will forever be etched in our hearts!

While KJo directed SRK in ‘Kuch Kuch Hota Hai’, co-starring Kajol and Rani Mukerji. A college drama that gave us Rahul (SRK) and Anjali (Kajol) and lots of sweet memories!

Appreciating the directors for giving him some of his most memorable films and fulfilling his dreams, King Khan posted a heart-warming post on his Instagram handle.

“Dreamers r good. But if those dreams r not given a direction they mean nothing. These 2 fulfilled every dream I had, over & above every dream they had for themselves. Adi & Karan. Does Y share this with all? Cos u should know, more important than ur dreams r those who fulfil them for u,” SRK wrote along with a picture featuring him with the filmmakers. 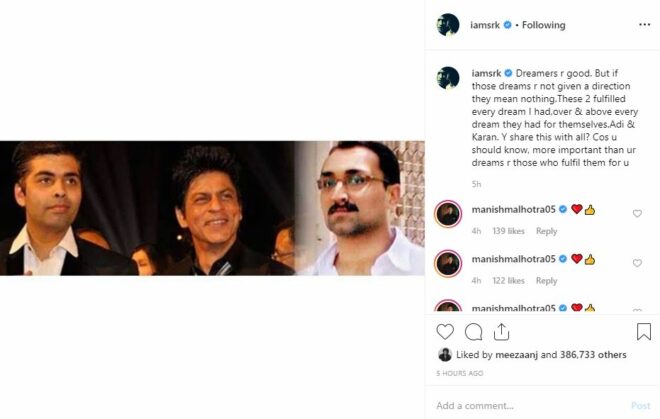 Aditya, after ‘DDLJ’, directed SRK in two other films including ‘Mohabbatein’ and ‘Rab Ne Bana Di Jodi’. While, SRK and Karan collaborated for several films including ‘Kabhi Khushi Kabhie Gham’, ‘Kabhi Alvida Naa Kehna’, ‘My Name Is Khan’ and the star also did a cameo in ‘Ae Dil Hai Mushkil’.

Meanwhile, on the work front, Shah Rukh was last seen in Aanand L Rai’s ‘Zero’, which also featured Anushka Sharma and Katrina Kaif in the lead roles. Reportedly, the star might feature in the remake of Amitabh Bachchan and Hema Malini-starrer ‘Satte Pe Satta’ alongside Katrina Kaif, which will be directed by Farah Khan Kunder.