New Delhi: Mrs funnybones is at it again! Twinkle Khanna, who is known for unfiltered opinions and witty responses, unlike other times, is not roasting someone. Instead, she accepted her defeat gracefully but added her own pinch of humour to it.

Twinkle, who is quite active on social media, constantly keeps updating her Twitter and Instagram feed with many on-point sarcastic digs that make the news, and this time around she shared a post which features her playing a game of chess with “Khiladiyon Ka Khiladi” Akshay Kumar and daughter Nitara.

In the picture, the ‘Mrs Funnybones’ author can be seen dressed up in a white tee paired with white trousers, teamed with a blue jacket and a pair of sneakers while Nitara stood next to her, dressed in a comfy grey tee and multi-coloured checkered pants with a pair of white sneakers.

Both can be seen looking at the huge chess board before them as Akshay declared checkmate. The ‘Mission Mangal’ star can be seen wearing black sweatshirt, maroon coloured cap, black trousers with yellow coloured stripes and a pair of white sneakers.

“Unfortunately when you play any game with a certain Khiladiyon Ka Khiladi losing is rather inevitable #ChessTime,” she captioned the post. 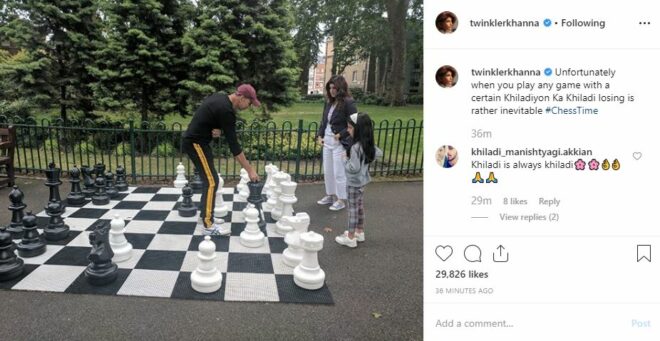 Twinkle never leaves an opportunity to crack a joke or give witty responses. The author is always found on the controversial end of the spectrum with almost every post that she shares. Twinkle is known for regularly taking potshots at the government and Prime Minister Narendra Modi has also been at the receiving end more than once.

Meanwhile, Twinkle’s latest book titled ‘Pyjamas are Forgiving’ has garnered immense appreciation and the readers are loving the refreshing content. Interestingly, her book ‘The Legends of Lakshmi Prasad’ also became an inspiration for the flick ‘Padman’ which starred Akshay Kumar, Radhika Apte, and Sonam K Ahuja.