UP: The undercurrent is an earthquake

After five phases, we believe we have understood the nature of the so-called undercurrent against the BJP in Uttar Pradesh. We think it’s time to call it what it is — a rumbling earthquake that is shaking the foundations of the social alliance the BJP had stitched together ahead of 2014.

The NDA won 73 seats with 41 per cent of the vote share in 2014. They won 325 assembly constituencies with a similar vote share in 2017. It’s simplistic to attribute these results to a Modi wave, or dismiss it as an anomaly or one-off and so on. 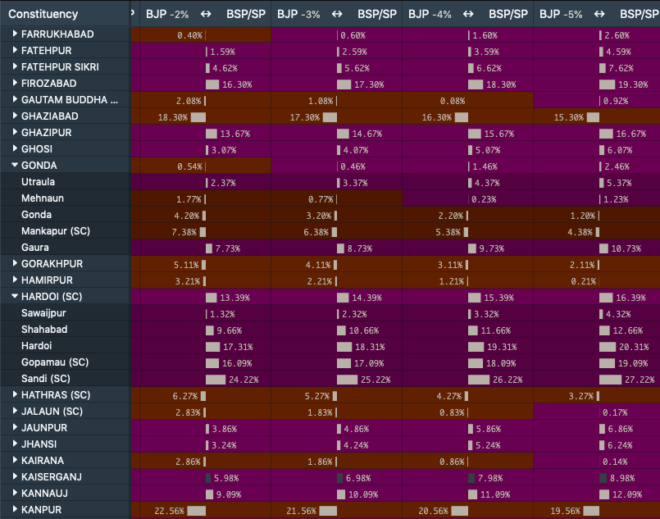 We know the BJP isn’t doing all that well this time around and we think we know what’s going on. But, let’s start by planting a flag. After five phases, we think it’s time to be clear about how the trends we have seen translate into numbers. We will NOT mention individual seats till the 20th when we will publish a seat by seat breakdown with the local factors that impacted polling on each seat.

We expect the SP-BSP-RLD gathbandhan to win between 40 and 55 seats, likely closer to 55 than 40. We expect the BJP to win between 15 and 25 seats. There is a slim possibility that they will win 30, but we think that’s unlikely now and expect them to trend closer to the lower end of this range. The Congress is likely to win 5-9 seats.
Honestly, what interests us more is how the BJP’s average vote share will change — we are projecting a drop of between 3 and 5 per cent. Here’s a map on the impact difference in vote share makes just using 2014 vote shares as a base.

A vote share represents different types of people with different motivations — it is made up of some people who agree with an ideology, others who believe they are finding space (and access to power) for their particular identity, there are those who care about an issue or a set of issues and believe in a party’s position on those issues, and then others who find themselves believing in a person.

Clearly, the BJP has supporters who believe in their vision for the country rooted in a particular ideology. They also have a set of people who believe in Narendra Modi and think he’s the best leader for this country. In this election, the BJP has retained both these groups of voters and definitely added many first time voters to the second.

In the run-up to 2014, Amit Shah moved quickly to capitalise on years of work by the BJP wooing non-Yadav OBCs and non-Jatav Dalits in Uttar Pradesh. By picking office-bearers and candidates from these communities the BJP offered itself as the first party of choice for people who felt left out by the SP, BSP and Congress. These people had expectations rooted in what they believe had happened for the Yadavs and the Jatavs — access to power that translates into a disproportionate share of benefits, and increased respect in their neighbourhoods because of proximity to power.

Adding them to the upper-caste voters they already had, the BJP built a formidable coalition around a charismatic leader who promised a lot.

The Narendra Modi government has centralised power like no one since Indira Gandhi. That has resulted in the perception that MPs have very little influence in New Delhi. And after the Yogi government came to power in Lucknow, disillusionment set in as the perception that their MPs had little power spread even more. It began with the choice of Yogi Adityanath as CM — an unexpected choice that took the backward-caste voter by surprise. Throughout the period of our study we keep pickup up rising resentment against the perception that Thakurs have too much influence. True or not, it’s also ended up impacting sections of the Brahmin vote.

The last-ditch attempt to replace sitting MPs with other candidates hasn’t gone down well either.

We believe there is a section of Kurmis and Kushwahas who haven’t voted for the BJP this time — they may have just decided to sit this one out, but the turnout suggests they have voted for the SP-BSP gathbandhan. And there’s a minor revolt brewing in the Nishad community as well.

And it will not be easy for them to recover from — communities in this part of the world have long memories.

Which brings me to Ayodhya. There is a simple question being discussed there for which the BJP has no answer — after having power for five years in the centre and two years in the state, why is there no progress on the temple?

But there is one group of people that may turn out to be the most significant: women.

Cutting across caste and community lines women voted for Narendra Modi in 2014. To them, he represented an economic promise. “Good times,” they believed would arrive soon — their lives would become easier.

Demonetisation was a shock. It broke their trust. While men revelled in an outpouring of schadenfreude believing the rich were suffering, it was women who saw their small savings become worthless, who scrambled to buy food or pay for essentials.

The stray cows that are roaming rural UP added insult to injury.

And well marketed, but poorly executed schemes, have only added to a growing anger amongst women — who’ve stayed quiet.

It is likely they are using this election as an opportunity to teach Narendra Modi’s BJP these lines written by William Congreve in 1697:

Heav’n has no rage, like love to hatred turn’d,

The “undercurrent” is an earthquake. A series of tremors fuelled by mostly disappointment and sadness but also anger and a sense of betrayal. Tremors that grow stronger where Muslims are turning out in record numbers for the candidate they expect will defeat a BJP candidate. And because Yadav and Dalit voters are enjoying a battle where they can fight with each other, instead of against each other.
We expect these tremors to intensify in the last two phases.

We are also seeing a rising excitement around the realisation that this isn’t only a vote against Modi any longer. That each vote may count towards a Mayawati led central government.

This may well result in a rout in the Eastern UP.

A Method to our Madness 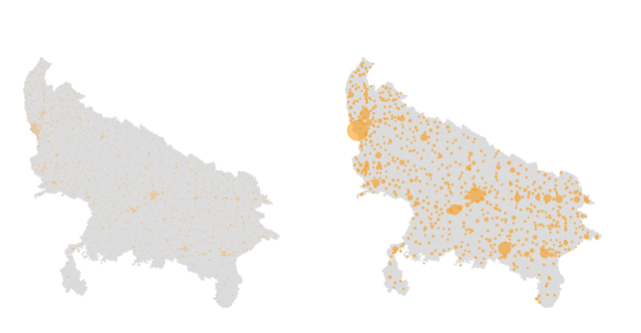 Anthro.ai is an experiment in alchemy — between experienced communications specialists, data scientists, anthropologists and mathematicians; and between the human mind heart and our instincts, and immersive data streams.

We have ingested and analysed nearly all publicly indexable data in, or about, UP. This includes news stories, job postings, classifieds about farm equipment, questions and answers about entrance exams, twitter posts etc. We have tried to match this data to a 1 square kilometer grid of Uttar Pradesh. We generate different patterns from this data — and immerse ourselves in these patterns.

We believe in the power of the human mind to connect the dots. No matter how complex the world gets, our brains continue to make sense of it for us. More often than not, how successfully we navigate complexity is a function of the dots we are able to see.

Our models start with answers to three basic questions: what do people hope for, what do they aspire to, and what are they scared of. Using the answers we come up with, we come up with motivations and triggers and then model how that translates into a vote. We then take historical electoral data — map swings there — and try and see how our model would impact electoral outcomes.

Lastly, we try and come up with markers/proxies for what the results may look like. These have ranged from predicting turnout numbers, to the use of a particular topic by a key politician in their messaging. If we see enough of our markers pop up, we start to believe in one of our models over others.

For every constituency in UP, we have a pre-poll prediction and the reasons why people turned out. We will publish this after the 19th, and before the 23rd of May.