As Mecca’s Grand Mosque overflows with pilgrims, some, more than others, find it difficult to complete their religious duties – mainly due to physical barriers.

Year after year, Saudi Arabia has worked hard on enhancing Masjid Al-Haram (the world’s largest mosque) with a team of skilled policemen and guards to help Muslims throughout their journey. It is only natural, then, to find videos of heroes in uniforms lending a hand to pilgrims.

One of these policemen won over people’s hearts online when he carried an elderly man up the stairs in the holy site. A seven-second clip capturing the heartwarming gesture went viral earlier this week and had people in tears over unexpectedly finding a piece of humanity still intact.

Even though the majority of people were all over the kind gesture, hailing the policeman for it, several hundreds were left wondering about the state of amenities offered to the disabled.

“We thank the guard for his help, but are there no elevators?” one twitter user wrote.

It also prompted others to call on authorities to supervise and provide such services for those who need them.

Many were moved by the clip

“This is the true definition of humanity” 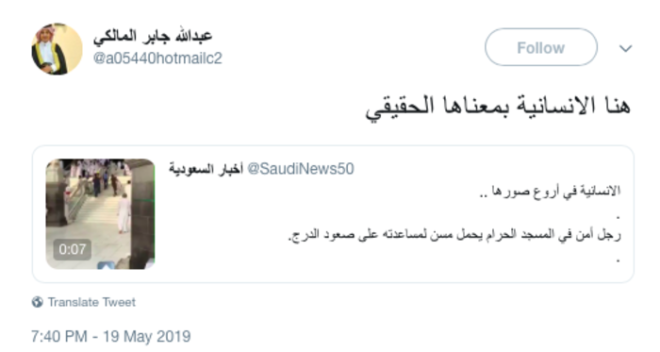 “These are our security men”

Many brought up the lack of needed services

“There should be elevators or ways for people with special needs to go up.”

At the time, the footage moved thousands who hailed the man for his kind gesture.