New Delhi: At the time when the entire nation is cheering for India in the ongoing Cricket World Cup 2019, Bollywood actors Neetu Kapoor and Rishi Kapoor are also “supercharged” for the game and posed with ‘Haryana Hurricane’ Kapil Dev, to show their enthusiasm for the tournament.

Neetu’s latest Instagram post is proof of how excited she and Rishi are about the ongoing world cup. Going by the post, it looks like the couple is in England for the match. However, Neetu did not reveal the location in the click.

Neetu captioned the picture as, “Supercharged about the World Cup,” and accompanied her post with hashtags like #kapildev #crickettales #hopingwemakeit.

The trio can be seen all smiles while posing for a happy picture together. 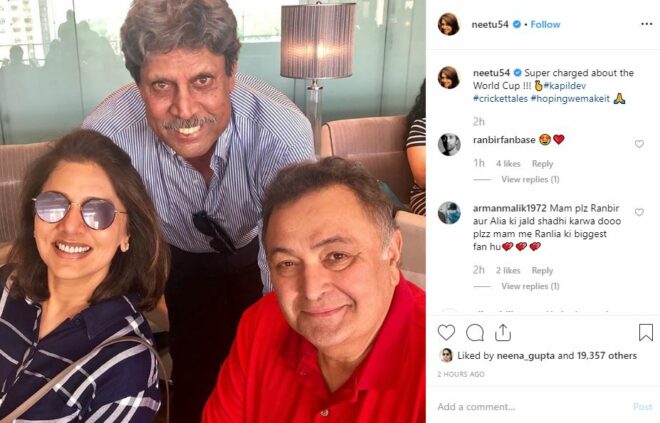 Indian cricket team has reached the semi-finals in the tournament. They will next take on Sri Lanka on July 6 at Headingley cricket ground, Leeds (England).

The World Cup fever can also be seen in social media posts of celebrities including Ranveer Singh, Mahesh Babu, television stars Asha Negi, Karan Wahi and Rannvijay Singha, who filled up their Instagram with pictures from the stadium.

Rishi, who has been in New York for over eight months to seek medical treatment for an unknown health condition, recently enjoyed a fam-jam with son Ranbir Kapoor, daughter Riddhima Kapoor Sahni, son-in-law Bharat Sahni and granddaughter Samara. The beyond adorable pictures were shared by Neetu and Riddhima.

The ‘Mulk’ actor, who went to the US in September last year, was last seen in the Netflix movie ‘Rajma Chawal’. He will next star in ‘Jhootha Kahin Ka’, which is slated to release on July 19.