Hyderabad: One can walk in at anytime, cook food to satiate his hunger, spend time reading books and take some rest. No questions are asked.

This is ‘Andari Illu’, a house for all in Hyderabad. Located at Kothapet, ‘Open House’ is open almost round the clock and for all, irrespective of religion or caste.

A student coming to the city from another town or village to appear in an exam or an interview, someone coming for treatment or any other work or simply anybody who is hungry can step in.

They are free to use the facility to freshen up, cook, eat and take some rest. There is rice, vegetables, utensils and gas stove always to cook the food.

There is no security guard to ask any question and no supervisor to check what one is doing. 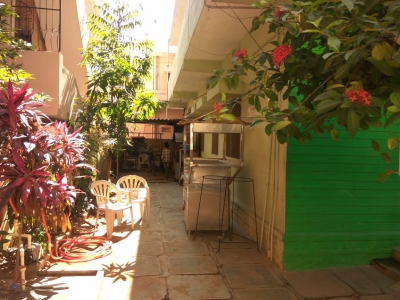 “Whoever comes here doesn’t have to prove he is a human being. Aliens are not going to come here. People come to meet their hunger. What they do after having food is left to the individual exposure,” said Dr Surya Prakash Vinjamuri, a physician who quit the profession and started an NGO called Life-Health Reinforcement Group (Life-HRG) in 1999 with the motto ‘protect life and promote health’

He and his wife, also a physician, have been working to address the issues of hunger, knowledge sharing and women’s health.

His first initiative was ‘banana cart’. People could buy bananas if they had money or pick them up if they were hungry and had no money. 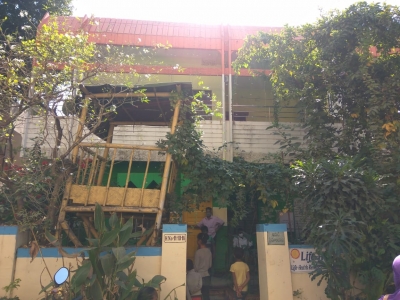 For 14 years, Open House has seen hundreds of people satiating their hunger or using it to fulfil their dreams of qualifying in competitive exams. Many of them secured jobs in the police, railways or became teachers but they remembered the days they spent here and have now joined hands with Prakash to pay back to society.

Active in social service for 36 years, Prakash proudly says that Open House is owned by the organisation. “I don’t own anything. I don’t even have bank account. The moment you start owning something your life becomes miserable,” says Dr Prakash, who quit the profession and conventional way of life to dedicate his life to be of some help to fellow beings.

Impressed with his innovative idea, people started contributing for the cause. “I never sought any donations because I believe that social service should be voluntary and should be done with pleasure not pressure. People bring ration and vegetables. They also gave various items,” he said pointing to furniture. 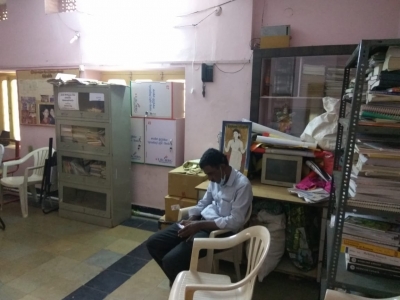 Dr Surya Prakash said they started Open House only with food but later kept books with the idea of sharing both food and knowledge. Today, the organisation has grounded 100 libraries at various places in Hyderabad and other parts of Telangana. Individuals running these libraries are also teaching arts and crafts to children.

He believes that the wealth one has is not his wealth but he is only a trustee. “Once people understand this the world will be a better place to live.”

His wife SVV Kameswari, also a physician, runs a fertility clinic on the first floor of the house. The activity is also part of the group’s motto as the patients who can afford the treatment also pay for those who can’t.

Before Covid, 40 to 50 people used to come to Open House every day but the numbers came down during the pandemic.

Since the house has only four rooms and some women patients who come from districts also stay there, others are not allowed to stay without prior permission.

“I couldn’t have afforded a rented room in the city. I came to know about this place from my friends and arrived here two days ago,” says K. Chiranjeevi from Siddipet. Chiranjeevi, who has done engineering, is searching for a job and has taken permission to stay at Open House for a few days.

Disclaimer: This story is auto-generated from IANS service.