New Delhi: Ayushmann Khurrana and Amitabh Bachchan will be seen together for the first time in Shoojit Sircar’s ‘Gulabo Sitabo’.

The news was confirmed by film critic and trade analyst, Taran Adarsh on Wednesday via Twitter.

Along with the tweet, Taran also shared two images, one featuring Ayushmann with Shoojit while the second image features Sircar with Big B and two other team members. 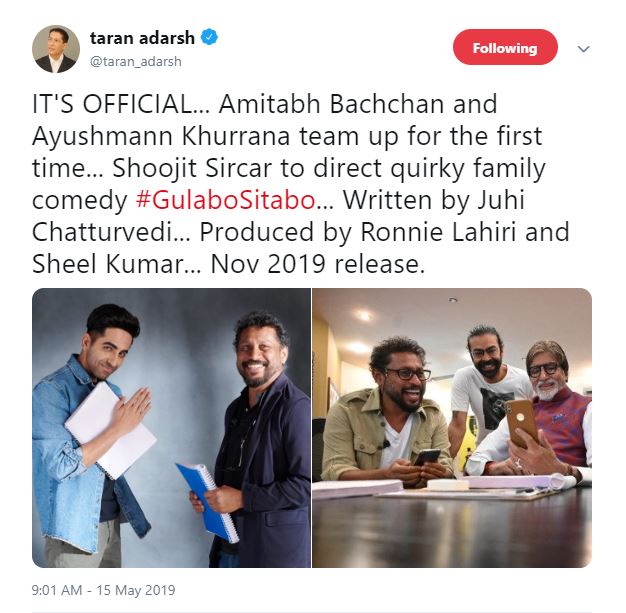 The quirky family comedy written by Juhi Chaturvedi will be helmed by Shoojit Sircar and produced by Ronnie Lahiri with Sheel Kumar.

The film is scheduled to hit the screens in November 2019.

Looks like Big B is on his way to work with people he has never worked before. Apart from teaming up with Khurrana for the first time, Senior Bachchan has already started shooting with Emraan Hashmi for Rumi Jaffrey’s mystery thriller ‘Chehre’.

Meanwhile, Ayushmann is also buckling up for his upcoming film ‘Shubh Mangal Zyada Saavdhan’ which is the sequel to the 2017 blockbuster ‘Shubh Mangal Savdhan’.