New Delhi: Amitabh Bachchan and Taapsee Pannu starrer ‘Badla’, opened to good reviews and performed remarkably well at the box-office on the first day of its release.

The film earned a total of Rs. 5.94 crore on its opening day, Indian film critic and trade analyst Taran Adarsh wrote on Twitter.

“#Badla goes from strength to strength on Day 1… Picked up speed late afternoon onwards at metros, with appreciable growth in the evening… Strong word of mouth has come into play… Should witness substantial growth on Day 2 and 3… Fri ₹ 5.04 cr. India biz. Gross: ₹ 5.94 cr.” the tweet read. 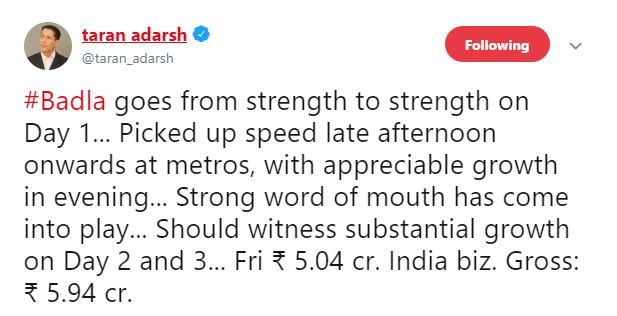 According to Adarsh, Badla “picked up speed late afternoon onwards” in metros, which was followed by “appreciable growth” during the evening shows. He also stated that “strong word of mouth” has come into play and that the film will witness “substantial growth” on its second and third days.

At the box-office, ‘Badla’ is facing tough competition from the Hollywood flick ‘Captain Marvel’, which minted around Rs. 15 crores.

‘Badla’ revolves around a murder mystery, where Taapsee’s character becomes the primary suspect after she is found with her boyfriend’s dead body and money in a locked room. Amitabh plays a successful lawyer, who has to defend and save her by solving the mystery.

Reportedly, the Sujoy Ghosh directorial is a remake of 2016 Spanish film ‘The Invisible Guest’, which was directed by Oriol Paulo.

The murder mystery has been widely shot in Scotland. It also stars Manav Kaul and Amrita Singh in pivotal roles. The film is produced by Shah Rukh Khan under his banner Red Chillies Entertainment along with Azure Entertainment.

‘Captain Marvel’ is the 21st instalment in Marvel’s Cinematic Universe. Not only that, but it is also the first female-led superhero film in the franchise.

Related News
Contribute
To contribute an article to Siasat Daily or enquire about syndication, please write to newsdesk@siasat.com