Ranchi: Tabrez Ansari was brutally thrashed by a mob at Dhatkidih village in Seraikela district on suspicion of stealing a bike. Later, police rushed him to a hospital where he died on Sunday.

His wife, Shaista Parveen is pregnant. In such a situation, it the responsibility of the philanthropists to help Shaista as her parents are very poor and Ansari’s father had passed away when he was seven-year-old whereas his mother died long back.

It may be mentioned that Shaista had got married to Tabrez last year. 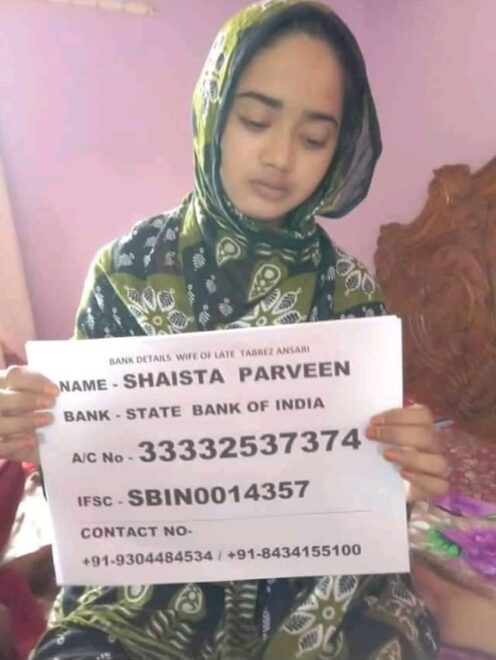 A relative of Tabrez Ansari, who was killed by a mob suspecting he stole a bike, has alleged that Tabrez was given poisonous water.

“After Tabrez was thrashed, he was given water mixed with ‘dhatura’ (a form of a poisonous leaf),” said Mohammad Masroor, uncle of Tabrez.

Meanwhile, Ansari’s wife has questioned the role of the police in her husband’s death, alleging he was not given timely medical treatment.

A CCTV footage of Sadar Hospital where Ansari was rushed for treatment showed the ‘unprofessional and inhumane’ attitude of the Jharkhand police.