New Delhi: Every new film comes with various opportunities for learning and trying out new things as well as challenges. Bollywood actor Arjun Kapoor too had one such empowering and therapeutic experience by learning horse riding for his upcoming film ‘Panipat’.

Arjun took to his Instagram account to share a picture where he can be seen riding a horse, in the caption, he shared his experience of taking up something new.

“New year, new learnings… so the last whole month of 2018 went in enjoying the company of an Animal, Mother Nature & Sunrises… as I gear up to restart shooting for Panipat I feel privileged to be able to learn this beautiful art of becoming one with this most glorious animal. The process of learning has been therapeutic & empowering at the same time. Can’t wait to get back on set with this new childlike excitement for what is my toughest & biggest film yet,” he wrote. 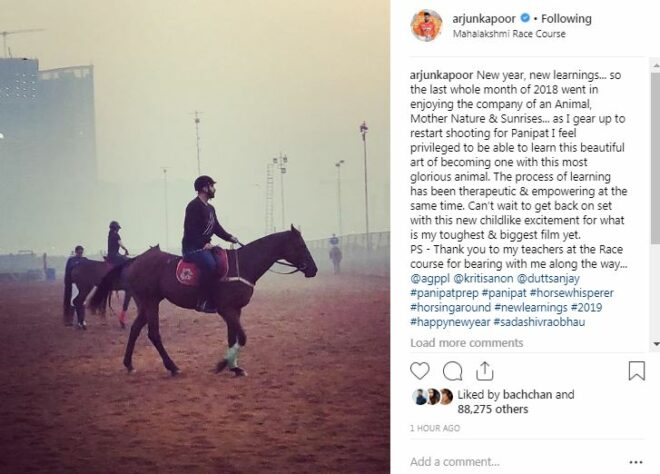 The 33-year-old actor also thanked his teachers at the course for helping and bearing with him.

“PS – Thank you to my teachers at the Racecourse for bearing with me along the way,” he added.

He also shared another candid photo on his Twitter handle featuring him petting a horse and captioned it: “She’s a beauty… ‘Panipat’ prep.” 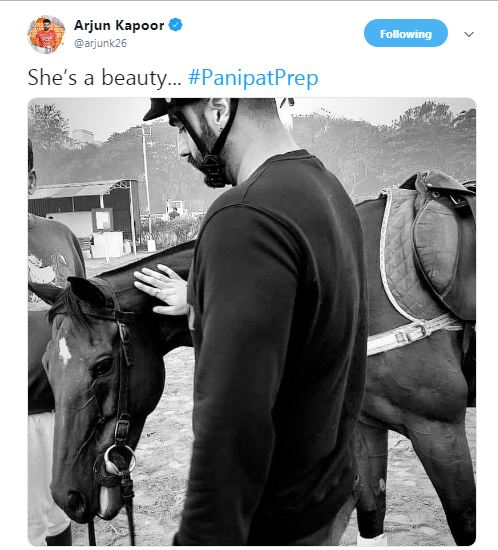 Actors always put their best foot forward and try to leave no stone unturned to get into their characters. Some work on their physiques for a specific role, while others master a new skill. And seems like Arjun too is charged up for the role and had a great time learning something new!

Also starring Sanjay Dutt, Kriti Sanon, and Madhuri Dixit, ‘Panipat’ is based on the ‘Third Battle of Panipat’ fought between the Maratha Empire lead by Sadashiv Rao Bhau and invading forces of Ahmad Shah Abdali, King of Afghanistan, on the big screen.

The film’s tagline reads ‘The Great Betrayal’ rightly sets the tone for the period drama. The project is helmed by Ashutosh Gowariker and is slated to release on December 6, 2019.