New Delhi: Emraan Hashmi shared his first look from the upcoming thriller ‘Chehre’ where he will be seen alongside Amitabh Bachchan. The actor also wrapped up shooting for his part of the film.

Emraan shared a picture of him in an intense look and accompanied it with a Shayari by director Rumi Jaffrey. The actor also indicated his wrap up in a hashtag ‘Wrap up Chehre’ which he added in the caption.

The ‘Why Cheat India’ actor is seen gazing at something with a serious expression on his face dominated by a heavy beard. He has donned a big fur overcoat on a black leather jacket. 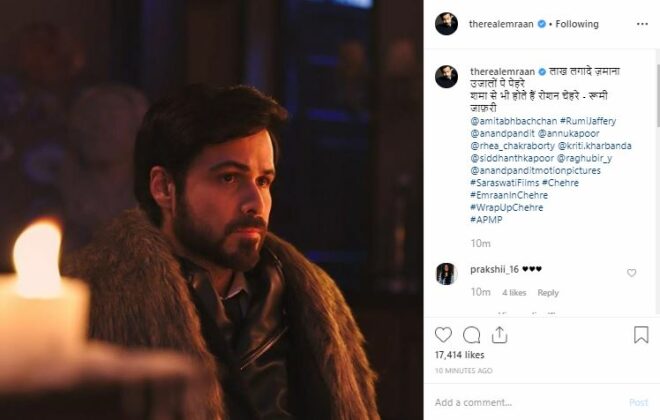 Film producer Anand Pandit also affirmed the actor’s wrap up and described his character on Instagram, “An actor steps into a new character and brings to us a persona which enters our life to entertain, sometimes even teach, at other times just help us forget our day to day ordeals!”

“Emraan Hashmi you have really raised the bar higher with Chehre and we, at Anand Pandit Motion Pictures, as well as the Indian cinemagoers worldwide, are waiting to see you in a completely new avatar in Chehre! And with this Emraan wraps up his Chehre Schedule!” the post ended.

Almost a month ago, senior Bachchan also gave a glimpse of his character in the film where he too was seen all packed up to shield him against the cold.

“Chehre’ marks Emraan’s first film with Amitabh and is being directed by Rumi Jaffrey. Other notable actors who will be seen in the film are Rhea Chakraborty Kriti Kharbanda, Annu Kapoor and Shraddha Kapoor’s brother Siddhanth Kapoor.

The film is being produced by Anand Pandit Motion Pictures and Saraswati Entertainment Pvt. Ltd. And will hit the silver screens next year on February 21.

Big B will be next seen in Ayan Mukerji’s ‘Brahmastra’ alongside Alia Bhatt and Ranbir Kapoor.

On the other hand, Emraan has been roped in for the Hindi remake of Malayalam supernatural thriller ‘Ezra’.