Hyderabad: There are air gaps between layers of lime mortar at Charminar, and insects eating into the binding material are two reasons for damage in Hyderabad’s iconic monument, found the Archaeological Survey of India (ASI) during an inspection on Tuesday.

The condition of the lime plaster on the chajjas and on the projected balcony of the southwest minaret is so bad. Most of the parts where the lime mortar is damaged, the material is crumbled with a mere touch. An observation of the archaeology officials shows that same portion has a fine gap between the core of the structure and the thick lime plaster.

An official of ASI says there are several reasons for this damage, the major among which is that the southwest minaret faces the brunt of the southwest monsoon. Heavy rains lash on it every year, and strong wind may cause damage. Also, man-made factors such as vibrations from nearby illegal constructions site and work by municipal body also compound to the damage. 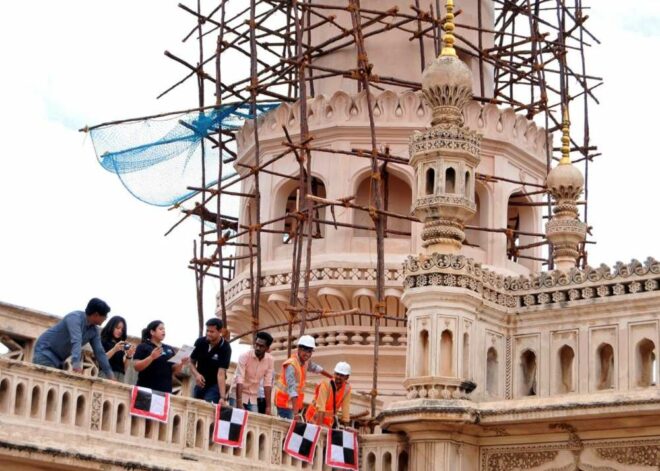 The four layers of Charminar

MK Chauley, Superintending Archaeologist of ASI said, “Not just the southwest minaret of the Charminar, but various parts of the monument also need attention. Take, for instance, the sibara coating is the topmost protective layer of the lime plaster which has peeled off at various places. The coating prevents rainwater from seeping in. Mr. Chauley added.

However, there is another small yet significant reason causing damage to the monument. An examination of a globular portion that was once a part of a decorative part of the monument showed that insects had caused damaged to it.

An ASI official said that back in the 19th century, masons used terracotta pipe, then bound it with jute and put it together with lime plaster to form the globular shape. A closer look into the damaged portion shows that insects have eaten into the jute.

So how is the ASI going to restore it?

Mr. Chauley explained that lime plaster has to be replaced wherever it has been damaged. “We don’t interfere with the monument unless there is a need for it. We follow archaeological principles like that of John Marshal which underline that there should be minimal intervention,” said Mr. Chauley.