We, as citizens of Mumbai, a city that has been target of brute acts of terror from across the border several times, and all of India, strongly condemn the latest such attack at Pulwama when the country has lost 44 selfless, jawans of the Central Reserve Police Force (CRPF) convoy in Kashmir on February 14. The aftermath of the attack has left us numbed with inescapable grief, even rage. First and foremost we send out our deepest condolences to the families of the bereaved CRPF jawans. 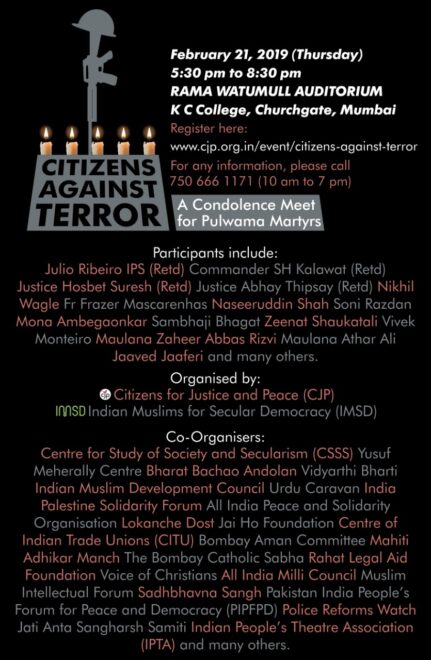 We need to stand united in this moment of grief and even anger and ensure that none of these takes an unhealthy and ugly turn. We need to honour what India and its forces stand for while unequivocally condemning not just the brutal attack on our forces but the reportedly inciteful video of JEM put out with the singular aim of fomenting a communal and hate-filled response. Those responsible for the attack are criminals who are mis-using a politicised and perverted version of faith to justify violence and bloodshed. They must be called out as such.

READ:  Deeply saddened to hear about passing away of Ahmed Patel: Venkaiah Naidu

Those from our security forces and police who are victims of such terror attacks must remain central to our discourse. We must demand not just compensation but reparation and justice for the families of jawans from the CRPF, Army, BSF, CISF and police who fall victim to these terror attacks.

As Indians coping with the Pulwama attack we must ensure that our response remains united and not divisive. An internal atmosphere of fear and instigation, whether it is against Kashmiris or Muslims, in general, will not just corrode our unity but affect our holistic and healthy response to this tragedy. Reprisal violence against innocents cannot be an answer.

If we allow terrorists to divide us, we aid them in their quest to destroy the idea of India. India’s democratic principles and Constitutional values are their greatest fears. That is what they hope to destroy. So let’s not allow them to do that.

READ:  BJP candidate complains of threats to his agent in Pinarayi's village

We are a democracy. So, as Indians, while we stand united in our grief and outrage, we must also exercise our right to question. These are questions that do not in any way take away from this and other acts of terror but seek to build on our strengths in fighting terror of all kinds. The government of the day needs to answer these questions from citizens especially as we are about to enter into an extremely emotive election season. Election speeches too must be monitored and watched, so that while condemning the terror attack they are in no way inciteful of hatred and violence against sections of our citizens.

There are procedures in both national and international law for bringing to justice perpetrators of terror attacks. Justice must be our lasting and unequivocal demand.