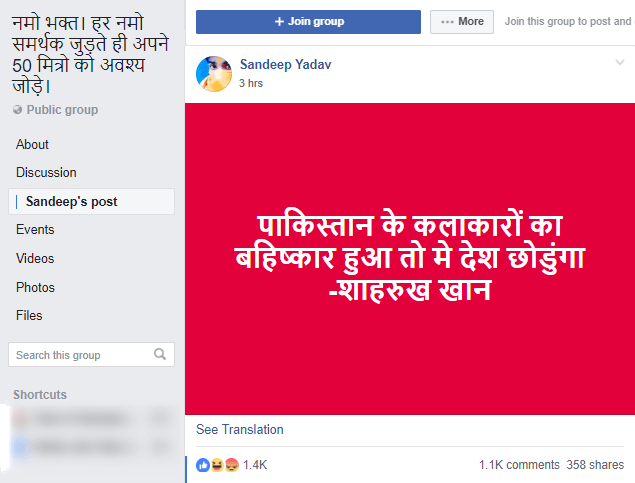 It has also been circulated by a few Twitter users.

Bollywood actor Shah Rukh Khan did not make the aforementioned statement. No media reports substantiate the claims that Khan said that he will leave India if the country bans Pakistani artists.

The actor had condemned the Pulwama attack on February 15, offering condolences to the families of the martyred soldiers.

Heartfelt condolences to the families of our valiant jawans. May the souls of our countrymen who laid their lives down for us rest in peace. #Pulwama

On February 18, All India Cine Workers Association announced a total ban on Pakistani actors and artists working in the Indian film industry.

The above-mentioned piece of misinformation wasn’t the sole instance when Shah Rukh Khan was targetted after the Pulwama terror attack. Earlier, fake news that the actor had donated Rs 45 crores to Pakistan but did not offer aid to martyred soldiers in India was viral. The actor has, in fact, found himself in the crosshairs of misinformation several times in the past.