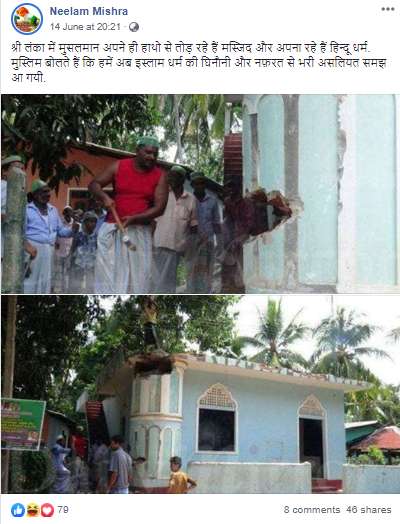 The claim has been propagated with the help of two photographs showing people wearing skull caps demolishing a structure. 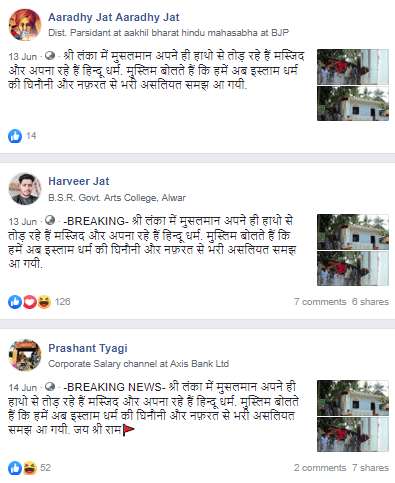 It has also been circulated by a few Twitter users. 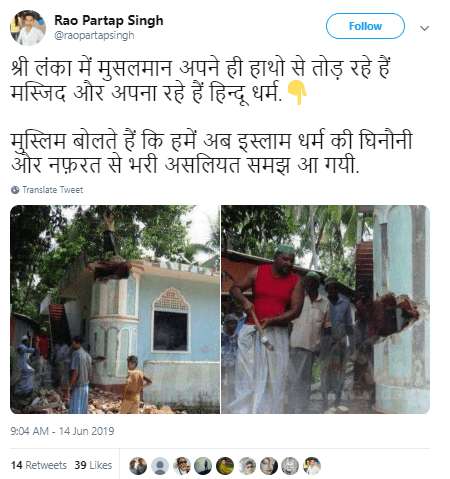 Why was the mosque demolished?

NTJ is the Sri Lankan Islamist extremist group which was implicated in the 2019 Easter Bombings where over 250 people were killed in coordinated attacks.

Daily Mirror also uploaded a video of the incident.

Apart from the mosque, residents also destroyed a plaque with Arabic inscriptions, per a report by local media outlet Hiru News.

Alt News contacted a Sinhalese translator who said that the people in the video claim that the mosque was constructed using funds from Arab countries. “Even the words on the board [plaque] are Arabic,” said one of the residents. Speaking to Ada Derana, the demolishers added that they have their own traditional place of worship [main mosque] and disapproved of “unnecessary Arab influence” on mosques.

AFP had earlier fact-checked the video when it was viral weeks after April’s easter bombings. The news organisation spoke to Kekirawa Police officer-in-charge Thilak Bandara Ganegoda regarding viral claims suggesting Muslims converted to Hinduism. The officer informed, “No religious conversions took place. The land was previously allocated to construct a children’s library and was handed over to its rightful owner.”

Akbar Khan had led the movement to tear down the building, according to AFP. “It was not demolished because of any link between that building and the NTJ or because any religious conversion took place,” he said. Khan echoed the statements of residents earlier mentioned in this report. He told Hiru News that the mosque was taken down because it was built using foreign funds. This was also tweeted by the deputy editor of Daily Mirror.