Hyderabad: A would-be groom included ‘request to vote a particular party’ in his wedding cards. He also mentioned that it will be his wedding gift.

According to the report published in The Hans India, a youth by name Mukesh Rao Yande (27) in his wedding card requested guests to vote BJP in the upcoming General Elections 2019. He printed, “Our gift is your vote for Modi in 2019 Lok Sabha elections” on his wedding card. 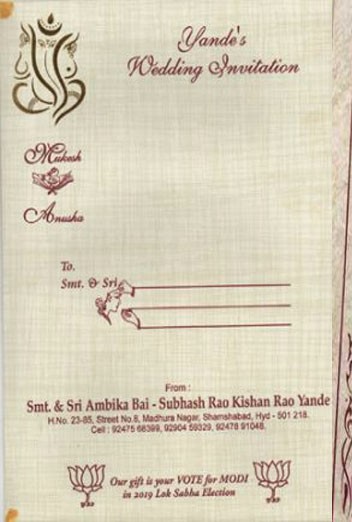 It is also reported that Mukesh, a resident of Shamsabad is an Asst. Engineer in TS Genco. His marriage is scheduled to be held on 27th February 2019.

As per details, earlier, the idea was objected by his parents. However, he convinced them.