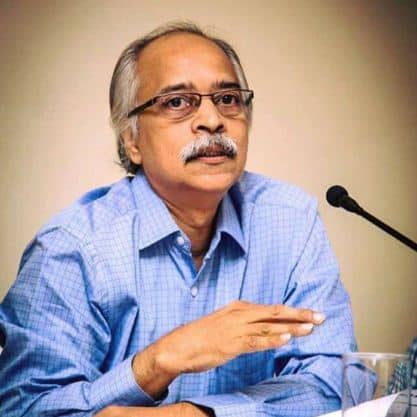 Hyderabad: Syed Akbaruddin is my perfect 10 kind of friend. Correct to a fault, this IFS Officer until a day ago (April 30) was India’s Ambassador and permanent representative to the United Nations (UN), based in New York.

We have been quiz mates, college mates and friends for forty years now.

It’s also a rare opportunity for me to share decades of friendship with Akbar, the top diplomat and be the student of his father, Prof S Bashiruddin, Head of Department of Communication and Journalism, Osmania University as well as Ambassador to Qatar.

Akbar is patience personified. Ever smiling and conversational with good old friends. Even after four decades, the same warmth, friendly spirit and disarming charm he possesses.  Those who saw his performance at the UN in August 2019 where he disarmed the Pakistani journalists with his quick response and endearing actions on India’s actions on J&K, would for sure have noticed his refined repartee.

During our College days, wherever Akbar was there would be a group. His friendly and genial mannerisms were a big draw from both sexes, as Nizam’s was one of the few coed colleges those days. A graduate in BA, Akbar was active in quizzing and politics. In fact he was a rare all-rounder.

I would like recall an interesting episode on quizzing. Doordarshan, Hyderabad, had invited Nizam College, a big name in literary circles during those days to take part in a quiz programme. So, a four-member team consisting of Majaz (Panjetan), Ravi Mokkapati ( who went to St Stephen’s later), Akbar and me were selected. Nanduri Vittal, the popular face of Doordarshan was the quizmaster. The opposition team was RBVR Women’s College.

To our utter surprise, we were told it was a quiz in Telugu. The questions were also more AP centric, Telugu literature etc. So the end result was too close a finish to our comfort and reputation. Back in classes, it was tough going with the college bulletin taking a swipe at us.  But, we ended up with the distinction of participating in the first ever Quiz on DDK Hyderabad in 1980.

College elections were another exciting time. Keenly fought they were colourful with posters, pamphlets and speeches. Akbar, who was popular among the students won as Joint Secretary against stiff opposition in 1978-79. But he quit his post as most elected in the panel were from the Opposition. G Amarinder Reddy (a big name in the construction business today) and Niroop Reddy ( SC Lawyer) etc.

After college, Akbar joined the University of Hyderabad (Political Science) at the Golden Threshold, Nampally. Occasionally, I would end up there and meet other friends too like Gym Sudhakar, Naresh and well known professors, Shantha Sinha, Rajen Harshe etc.

On other occasions, we would go to his place in the Osmania University campus. His father was Prof. Bashiruddin and mother, Zeba Bashiruddin, a committed teacher. The family also carried a strong association with Sathya Saibaba of Puttaparthi.

Our quizzing took us to the K Circle. He was preparing for the IAS exam too and was completely thorough with current affairs. Me, Akbar and Bala (among the best then), formed a team at K Circle. I was so lucky that we won quizzes by the dozen as they say. On one occasion, we managed to win two—One in Mahbub College (Secunderabad) in the morning and another in Gandhi Medical College in the afternoon.

It was Akbar, who got me onto learning a Lambretta. My dad had a heavyweight Lamby. I used to struggle to get it out from its stand & kick start due to my thin frame. Akbar too had a well maintained one, so I managed to do the initial learning.

I fondly recollect one of our first outings which was to attend the wedding of  Ramakrishna ( now a reputed builder) in a village near Achampet in Mahbubnagar district. Me, Akbar, gym Sudhakar and late Pradeep drove on two-wheelers. It was a grand and memorable marriage, which we enjoyed thoroughly.

Around 1982-83, Akbar moved to Australia and me into journalism. Our paths crossed often during his trips, back home. I remember he gifting me a ‘hot shot’ camera and a book on Donald Bradman from Australia, where he had gone to do Master’s on a Ford Foundation scholarship in Canberra.

In 1985, he cracked the Civil Services and qualified for his preferred IFS. His marriage to University mate Padma was a simple affair. I remember attending a modest reception in Rail Kala Rang.

As a career diplomat, Akbar has traversed a wide path across the globe. His specialisation in Middle East and fluency in Arabic took him to Egypt, Saudi Arabia etc. During his early years he was posted in Cairo, which was one of our dream cities to visit for its Pyramids. I had an open invitation. However, it was a Scientist friend in RRL, Dr Kaiser Jameel who made it to the ancient city and connected with Akbar. She came back to tell how hospitable and friendly Akbar was. During the turbulent times of the Gulf War, he was in Jeddah, Saudi Arabia, where some of the action from Saddam Hussain’s missile attacks happened.

He steadily rose in the diplomatic circles. Going from one challenging assignment to another. His stint at the IAEA in Vienna, post Pokhran nuclear blast and the run up to the Indo-US nuclear deal days was eventful. Then again he assumed a senior role in Saudi Arabia. Akbar, the suave diplomat emerged as the visible face of the Ministry of External Affairs as the Spokesperson during 2012-15. This tenure was the most impactful as he came through as someone who was easily accessible but a deft handler of tough questions, with diplomatic answers.

It was grapevine in the corridors of power in Delhi that his role in projecting the MEA positively, active engagement in the social media and affable nature caught the attention of Prime Minister, Narendra Modi in 2014. Modi reportedly said “I follow your tweets.” No wonder, his image only grew in MEA with the charge given to liaise the mega Africa Summit in New Delhi and also to help Sushma Swaraj.

At the end of 2015, Akbar was given the prestigious role of Ambassador and India’s Permanent Representative at the UN Mission. In this role, his performance has peaked. His managing of the contentious decisions of the Modi Government on abrogation of Art 370 of J& K, getting the notorious terrorist Masood Azhar blacklisted… have won him wide acclaim.

What stands him in good stead is the strong subject knowledge, truly secular credentials, a communication & diplomatic grounding from early days as well as a sound knowledge of India’s cultural and historical past.

For many of his friends and contemporaries the get together at the Secunderabad Club will remain memorable. It was perhaps one of the largest rendezvous of the alumni, with close to 300 attending.

A year ago when a close group of friends met at the Sailing Club in Hyderabad, Akbar remained as he is known as the guy who is always focused, soft spoken, articulate and with hardly any enemies. Kudos.

Somasekhar Mulugu, former Associate Editor & Chief of Bureau of The Hindu BusinessLine, is a well-known political, business and science writer and analyst based in Hyderabad.