New Delhi: Not astonishingly, despite lynchings and ban, India continues to stay as world’s top beef exporter. India’s exports of beef are on the rise even as several states expand their bans on the slaughter of cows and bullocks.

Legislation against cattle slaughter is in place throughout most states of India except Kerala, West Bengal, and states of the North-East.

However, according to a report by the U.S. Department of Agriculture (USDA), India has been the largest exporter of beef in the world since last year, and has further widened its lead over second-ranked Brazil with a projected total of 2.4 million tons exported in 2015 against Brazil’s 2 million. 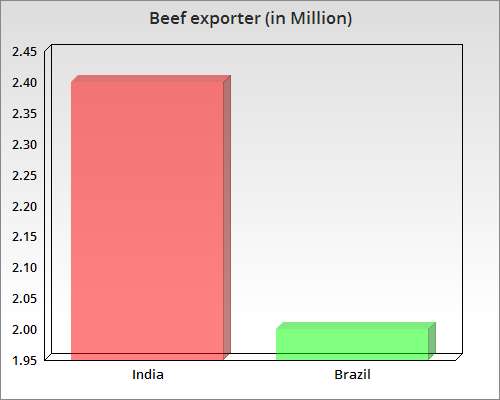 The USDA report, released earlier this month, predicts that global beef exports overall will rise to a record 10.2 million tons, 3% higher than the October 2014 forecast.

Beef has also overtaken basmati rice as India’s largest agricultural food export in terms of value, according to data from the country’s Agricultural and Processed Food Products’ Export Development Authority.

Although the slaughter of cows, sacred for the Hindus that make up India’s majority population, has long been banned in several parts of the country, states like Maharashtra — one of its largest — recently expanded the ban to include bulls and bullocks as well. However, since India’s exports are composed entirely of water-buffalo meat or carabeef, the bans will not affect the figures cited in the report.

Latest News
Contribute
To contribute an article to Siasat Daily or enquire about syndication, please write to newsdesk@siasat.com