San Fransisco: Singapore and Hong Kong are the number one countries when it comes to online companies doing business abroad. India fell just outside the top ten but still ahead of the UK and US.

This was revealed in a study conducted by San Francisco-based online payment processing firm Stripe which specialises in helping internet companies do business online.

With 43 percent of the world’s population or about 3.2 billion people using the Internet, global expansion which was once the domain of giant multinationals is now within the reach of small companies and start-ups.

In its study, Stripe surveyed 9,000 founders and senior executives of online businesses across 15 global markets and 10 industries who have embraced the connected world to reach a wider customer-base to power their international expansion.

Despite the relatively low ranking, new start-up Indian companies in recent times have expanded overseas more aggressively and earlier in their growth cycle than their predecessors. They have made their presence felt in various parts of the world including Southeast Asia, China, Australia, US and the UK. OYO and Ola Cabs are unicorn companies given as examples by Forbes that have done well abroad. Smaller start-ups like Burger Singh (restaurant chain), Synup (SaaS firm) and Hacker Earth (programming platform) have also made significant inroads into overseas markets.

As expected, the propensity for businesses to expand abroad depends very much on the size of their domestic market.

Thus, it is not surprising that Hong Kong and Singapore firms which have relatively fewer local customers are the most eager to reach out internationally. Whereas, online businesses in the US and UK and to a lesser degree India are laggards where it comes to foreign expansion. Europe also lags Asia although the EU has a digital marketplace programme which aims to foster cross-border trade among its members.

The Stripe report also says that for new-age online businesses, international expansion is a top priority and it often takes precedence over other important business functions such as sales, marketing, engineering and HR. Some 70 percent of online businesses sell outside their home markets today. The figure is even higher among those with more than 50 employees with 90 percent selling across borders. This number is less than 10 percent for all companies overall. In the US, the Commerce Department reports that less than one percent of their 30 million companies sell abroad.

The report further suggests that international expansion correlates with long-term economic success and productivity. There is evidence that points towards a relationship between the speed of internationalization and faster growth. Indeed, 60 percent of online companies with international sales entered new markets in the first year of their existence. Over the last five years, firms that sold product and services internationally during their first year grew 141 percentage points faster in revenue and 15 percentage points more quickly in headcount than the ones that were slower to reach international markets. 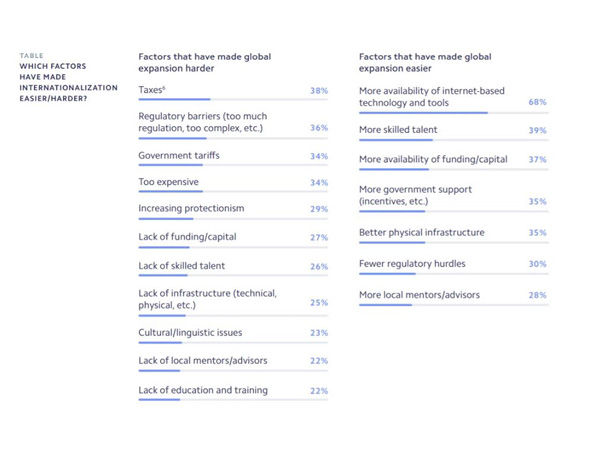 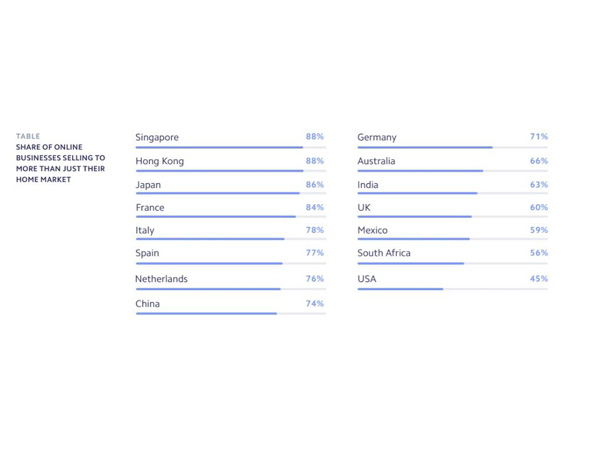 Naturally, not all business grew at the same pace. SaaS (software as a service) and gaming businesses grew the fastest internationally whereas hospitality and digital content companies grew the slowest. The rationale for this is that pure software businesses scale easier than businesses that require physical infrastructure or content creation.

In the Stripe study, online businesses say that the reason global expansion is easier is that of the availability of new online business tools and services like payments and business formation, online advertising technologies, localization and translation services, and cloud computing infrastructure.

Social media has played an important role too. Half of the online businesses say social media is their number one international marketing channel, ahead of traditional advertising (43 percent) and website localization (40 percent).

Although many of these new-age businessmen hail the availability of a new set of tools and services in recent years as the main factor that has made global trade easier, in the same breath, they lament that tariffs, taxes, and government regulation have created additional hurdles for them. Indeed, 42 percent of those surveyed say running an international business has become harder than it was five years ago. Only 36 percent say expanding internationally is becoming easier. Online businesses say they spend between 5.9 percent and 37.8 percent of their net profit on regulation and compliance every year—and 54 percent say this amount has been increasing recently.

A new generation of online entrepreneurs and digitally savvy businessmen are transforming the international business landscape. They are more willing than their predecessors to expand internationally with many doing so from the onset of setting up their business. This is facilitated by online tools and services which are affordable and readily available today. They can be a significant contributor to global economic growth in the future. However, that potential and its promise to boost the global economy may never be fully realized without supportive government policies and regulations.

Get the news updates on WhatsApp & Telegram by subscribing to our channels. For all the latest Business updates, download our app Android and iOS.